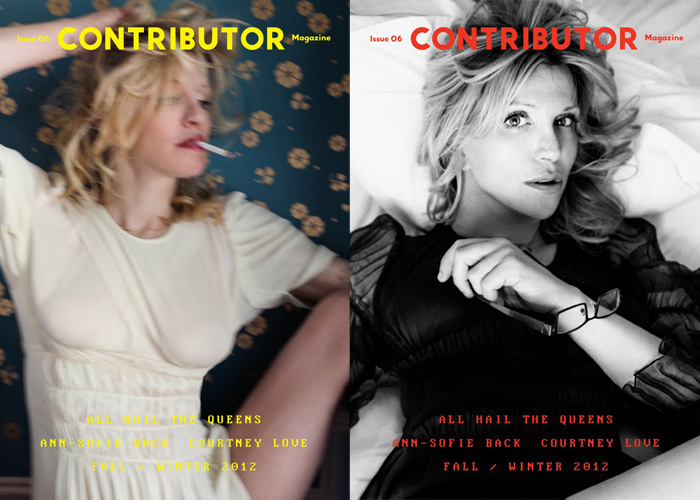 Courtney Love and Ann-Sofie Back

For this issue, we decided to take a closer look at designer Ann-Sofie Back without letting her know anything about our plans. We contacted her closest friends, colleagues and collaborators, and had paparazzi photographers follow her every move around Stockholm. Everyone involved was sworn to secrecy and despite the obvious problems a project like this one causes, we’re very happy to have managed to pull this stunt off.

Why dedicate a whole issue to Ann-Sofie Back? For me it was a natural choice and something I have long wanted to do. I first heard of Ann-Sofie Back in the mid 90s. What was unusual about Ann-Sofie right from the start was the amount of appreciation she got. Her talent was something new, and much longed-for.

Eventually I met her a few times through mutual friends in Sweden. But it was when she was about to show in Paris for the first time that we started to become friends. It was her first show and she needed a few pointers, that’s how I became involved. We got together at her place in London. Ann-Sofie and I are quite different as people but we soon realized that we liked each other’s types. That was the unexpected beginning of a long and rewarding friendship. London was our meeting place for years. When I came over from Stockholm we would work together intensely. We slept, ate, took the tube, we did everything together.

One of my favorite collections of the ones she made in London is probably “The Shoulder Pad Collection.” It was a few years ago now, but I still think it is completely and utterly fierce. It’s an example of the impact of Ann-Sofie’s older collections continue to have today. The clothes still provoke emotions, people have a eureka moment when old ASB pieces come out. The collections last and are downright remarkable. Ann-Sofie hasn’t just produced clothes; she has actually designed every single garment.

It’s worth showing all her collections in one issue because the memory of the fashion world is like that of a guppy. Fashion just keeps happening, so many designers recycle themselves and recycle other designers. Given all that, it’s interesting to pause and delve deep into one designer. In this case someone that addresses the quotidian in a way that we can all relate to, and who has chosen to be true to her viewpoint all the way.

It has struck me that she really is a genius. Ann-Sofie always has her own aesthetic and her own idea of what she wants to do. She’s been true to her inspiration, always commenting on the world we live in, and has stuck to it, for better and for worse.

Ann-Sofie has always emphasized the social side of fashion, and addressed how we constantly fail to live up to the ideal version of ourselves, be it through clothes or other forms of expressions. And why should that failure be so bad? Ann-Sofie’s strength is that she makes engrained presuppositions visible. She has the ability to reverse the order and make the unappealing beautiful, she relativizes beauty by letting it show its ugly side. What other designer can make failed glamour the norm, and the ordinary look like a stroke of genius, the way Ann-Sofie does?