When British codebreaking hero Alan Turing died just before his 42nd birthday, a partly eaten apple, seemingly laced with cyanide was found by his deathbed. Professor S. Barry Cooper explores his life, death and its meaning.

It was a Monday — June 7, 1954 to be precise — when Alan Turing, father of the modern computer, and Enigmatic decrypting genius of World War II, died alone in the north of England. It was just two weeks before his 42nd birthday when he was found by his housekeeper, Eliza Clayton. “An awful shock” is how she described it in a letter to Turing’s mother Sara.

It is the partly eaten apple by his deathbed, laced with cyanide, and its association with Turing’s disturbing memories of the 1937 Snow White and the Seven Dwarfs movie that make his death stick in the popular mind. British writer Alan Garner used to run with Turing and remembers: “We had one thing in common: a fascination with Disney’s Snow White and the Seven Dwarfs, especially the transformation of the Wicked Queen into the Witch. He used to go over the scene in detail, dwelling on the ambiguity of the apple, red on one side, green on the other, one of which gave death. We had both been traumatised by Walt.”

The history — so poignantly brought alive in Oscar-winning movie The Imitation Game — is littered with such ironies, many of them revelled in by Turing himself and his friends.  Their black humour is caught in the 1992 BBC film — available on the web as The Strange Life and Death of Dr. Turing — telling how Turing was bullied to the point of suicide for having sex in Manchester with local man Arnold Murray. At that time, homosexual acts were illegal in Britain and when Turing was convicted in 1952, the court gave him a choice between prison or chemical castration. He chose the latter. Turing’s friends, his PhD student Robin Gandy, and others, describe with ironic schoolboyish guffaws Turing’s naive honesty to the police; about “soixante neuf” with Arnold (you don’t need to be a mathematician to decode what the number was referring to); and his speculation afterwards about whether the penalty for “buggering a sheep” might be even worse, as much as ten years in jail. 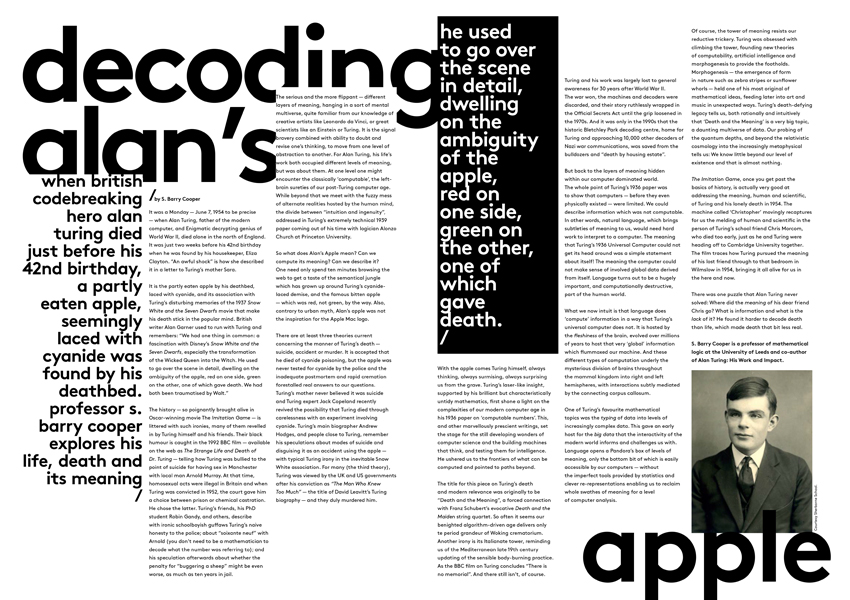 The serious and the more flippant — different layers of meaning, hanging in a sort of mental multiverse, quite familiar from our knowledge of creative artists like Leonardo da Vinci, or great scientists like an Einstein or Turing. It is the signal bravery combined with ability to doubt and revise one’s thinking, to move from one level of abstraction to another. For Alan Turing, his life’s work both occupied different levels of meaning, but was about them. At one level one might encounter the classically ‘computable’, the left brain sureties of our post-Turing computer age. While beyond that we meet with the fuzzy mess of alternate realities hosted by the human mind, the divide between “intuition and ingenuity”, addressed in Turing’s extremely technical 1939 paper coming out of his time with logician Alonzo Church at Princeton University.

So what does Alan’s Apple mean? Can we compute its meaning? Can we describe it? One need only spend ten minutes browsing the web to get a taste of the semantical jungle which has grown up around Turing’s cyanide-laced demise, and the famous bitten apple — which was red, not green, by the way. Also, contrary to urban myth, Alan’s apple was not the inspiration for the Apple Mac logo.

There are at least three theories current concerning the manner of Turing’s death — suicide, accident or murder. It is accepted that he died of cyanide poisoning, but the apple was never tested for cyanide by the police and the inadequate postmortem and rapid cremation forestalled real answers to our questions. Turing’s mother never believed it was suicide and Turing expert Jack Copeland recently revived the possibility that Turing died through carelessness with an experiment involving cyanide. Turing’s main biographer Andrew Hodges, and people close to Turing, remember his speculations about modes of suicide and disguising it as an accident using the apple — with typical Turing irony in the inevitable Snow White association. For many (the third theory), Turing was viewed by the UK and US governments after his conviction as “The Man Who Knew Too Much” — the title of David Leavitt’s Turing biography — and they duly murdered him.

With the apple comes Turing himself, always thinking, always surmising, always surprising us from the grave. Turing’s laser-like insight, supported by his brilliant but characteristically untidy mathematics, first shone a light on the complexities of our modern computer age in his 1936 paper on ‘computable numbers’. This, and other marvellously prescient writings, set the stage for the still developing wonders of computer science and the building machines that think, and testing them for intelligence. He ushered us to the frontiers of what can be computed and pointed to paths beyond.

The title for this piece on Turing’s death and modern relevance was originally to be “Death and the Meaning”, a forced connection with Franz Schubert’s evocative Death and the Maiden string quartet. So often it seems our benighted algorithm-driven age delivers only the period grandeur of Woking crematorium. Another irony is its Italianate tower, reminding us of the Mediterranean late 19th century updating of the sensible body-burning practice. As the BBC film on Turing concludes “There is no memorial”. And there still isn’t, of course.

Turing and his work was largely lost to general awareness for 30 years after World War II. The war won, the machines and decoders were discarded, and their story ruthlessly wrapped in the Official Secrets Act until the grip loosened in the 1970s. And it was only in the 1990s that the historic Bletchley Park decoding centre, home for Turing and approaching 10, 000 other decoders of Nazi war communications, was saved from the bulldozers and “death by housing estate”.

But back to the layers of meaning hidden within our computer dominated world. The whole point of Turing’s 1936 paper was to show that computers — before they even physically existed — were limited. We could describe information which was not computable. In other words, natural language, which brings subtleties of meaning to us, would need hard work to interpret to a computer. The meaning that Turing’s 1936 Universal Computer could not get its head around was a simple statement about itself! The meaning the computer could not make sense of involved global data derived from itself. Language turns out to be a hugely important, and computationally destructive, part of the human world.

What we now intuit is that language does ‘compute’ information in a way that Turing’s universal computer does not. It is hosted by the fleshiness of the brain, evolved over millions of years to host that very ‘global’ information which flummoxed our machine. And these different types of computation underly the mysterious division of brains throughout the mammal kingdom into right and left hemispheres, with interactions subtly mediated by the connecting corpus callosum.

One of Turing’s favourite mathematical topics was the typing of data into levels of increasingly complex data. This gave an early host for the big data that the interactivity of the modern world informs and challenges us with. Language opens a Pandora’s box of levels of meaning, only the bottom bit of which is easily accessible by our computers — without the imperfect tools provided by statistics and clever re-representations enabling us to reclaim whole swathes of meaning for a level of computer analysis.

Of course, the tower of meaning resists our reductive trickery. Turing was obsessed with climbing the tower, founding new theories of computability, artificial intelligence and morphogenesis to provide the footholds. Morphogenesis — the emergence of form in nature such as zebra stripes or sunflower whorls — held one of his most original of mathematical ideas, feeding later into art and music in unexpected ways. Turing’s death-defying legacy tells us, both rationally and intuitively that ‘Death and the Meaning’ is a very big topic, a daunting multiverse of data. Our probing of the quantum depths, and beyond the relativistic cosmology into the increasingly metaphysical tells us: We know little beyond our level of existence and that is almost nothing.

The Imitation Game, once you get past the basics of history, is actually very good at addressing the meaning, human and scientific, of Turing and his lonely death in 1954. The machine called ‘Christopher’ movingly recaptures for us the melding of human and scientific in the person of Turing’s school friend Chris Morcom, who died too early, just as he and Turing were heading off to Cambridge University together. The film traces how Turing pursued the meaning of his lost friend through to that bedroom in Wilmslow in 1954, bringing it all alive for us in the here and now.

There was one puzzle that Alan Turing never solved: Where did the meaning of his dear friend Chris go? What is information and what is the lack of it? He found it harder to decode death than life, which made death that bit less real.

S. Barry Cooper is a professor of mathematical logic at the University of Leeds and co-author of Alan Turing: His Work and Impact.