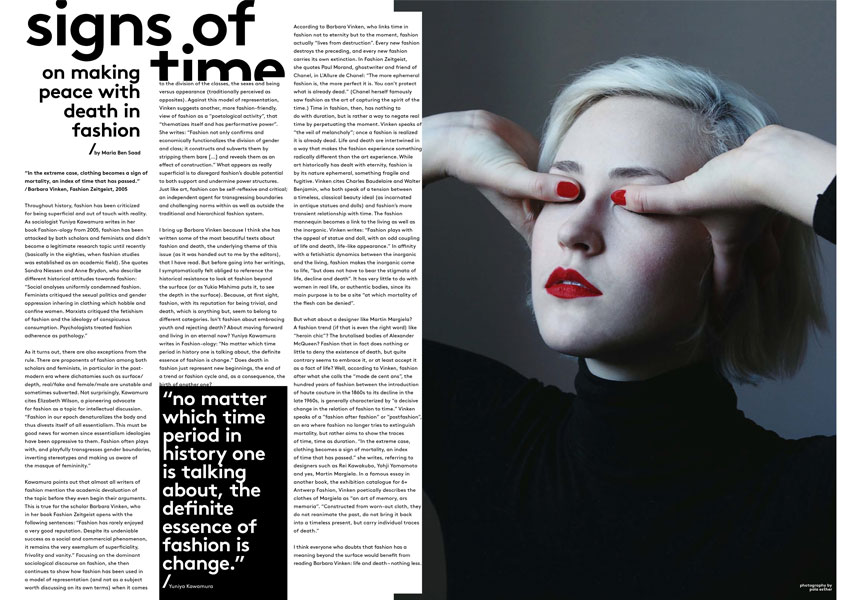 SIGNS OF TIME. ON MAKING PEACE WITH DEATH IN FASHION

“In the extreme case, clothing becomes a sign of mortality, an index of time that has passed.”
/ Barbara Vinken, Fashion Zeitgeist, 2005

Throughout history, fashion has been criticized for being superficial and out of touch with reality. As sociologist Yuniya Kawamura writes in her book Fashion-ology from 2005, fashion has been attacked by both scholars and feminists and didn’t become a legitimate research topic until recently (basically in the eighties, when fashion studies was established as an academic field). She quotes Sandra Niessen and Anne Brydon, who describe different historical attitudes towards fashion: “Social analyses uniformly condemned fashion. Feminists critiqued the sexual politics and gender oppression inhering in clothing which hobble and confine women. Marxists critiqued the fetishism of fashion and the ideology of conspicuous consumption. Psychologists treated fashion adherence as pathology.”

As it turns out, there are also exceptions from the rule. There are proponents of fashion among both scholars and feminists, in particular in the postmodern era where dichotomies such as surface/ depth, real/fake and female/male are unstable and sometimes subverted. Not surprisingly, Kawamura cites Elizabeth Wilson, a pioneering advocate for fashion as a topic for intellectual discussion. “Fashion in our epoch denaturalizes the body and thus divests itself of all essentialism. This must be good news for women since essentialism ideologies have been oppressive to them. Fashion often plays with, and playfully transgresses gender boundaries, inverting stereotypes and making us aware of the masque of femininity.”

Kawamura points out that almost all writers of fashion mention the academic devaluation of the topic before they even begin their arguments. This is true for the scholar Barbara Vinken, who in her book Fashion Zeitgeist opens with the following sentences: “Fashion has rarely enjoyed a very good reputation. Despite its undeniable success as a social and commercial phenomenon, it remains the very exemplum of superficiality, frivolity and vanity.” Focusing on the dominant sociological discourse on fashion, she then continues to show how fashion has been used in a model of representation (and not as a subject worth discussing on its own terms) when it comes to the division of the classes, the sexes and being versus appearance (traditionally perceived as opposites). Against this model of representation, Vinken suggests another, more fashion-friendly, view of fashion as a “poetological activity”, that “thematizes itself and has performative power”. She writes: “Fashion not only confirms and economically functionalizes the division of gender and class; it constructs and subverts them by stripping them bare […] and reveals them as an effect of construction.” What appears as really superficial is to disregard fashion’s double potential to both support and undermine power structures. Just like art, fashion can be self-reflexive and critical; an independent agent for transgressing boundaries and challenging norms within as well as outside the traditional and hierarchical fashion system.

I bring up Barbara Vinken because I think she has written some of the most beautiful texts about fashion and death, the underlying theme of this issue (as it was handed out to me by the editors), that I have read. But before going into her writings, I symptomatically felt obliged to reference the historical resistance to look at fashion beyond the surface (or as Yukio Mishima puts it, to see the depth in the surface). Because, at first sight, fashion, with its reputation for being trivial, and death, which is anything but, seem to belong to different categories. Isn’t fashion about embracing youth and rejecting death? About moving forward and living in an eternal now? Yuniya Kawamura writes in Fashion-ology: “No matter which time period in history one is talking about, the definite essence of fashion is change.” Does death in fashion just represent new beginnings, the end of a trend or fashion cycle and, as a consequence, the birth of another one?

According to Barbara Vinken, who links time in fashion not to eternity but to the moment, fashion actually “lives from destruction”. Every new fashion destroys the preceding, and every new fashion carries its own extinction. In Fashion Zeitgeist, she quotes Paul Morand, ghostwriter and friend of Chanel, in L’Allure de Chanel: “The more ephemeral fashion is, the more perfect it is. You can’t protect what is already dead.” (Chanel herself famously saw fashion as the art of capturing the spirit of the time.) Time in fashion, then, has nothing to do with duration, but is rather a way to negate real time by perpetuating the moment. Vinken speaks of “the veil of melancholy”; once a fashion is realized it is already dead. Life and death are intertwined in a way that makes the fashion experience something radically different than the art experience. While art historically has dealt with eternity, fashion is
by its nature ephemeral, something fragile and fugitive. Vinken cites Charles Baudelaire and Walter Benjamin, who both speak of a tension between a timeless, classical beauty ideal (as incarnated in antique statues and dolls) and fashion’s more transient relationship with time. The fashion mannequin becomes a link to the living as well as the inorganic. Vinken writes: “Fashion plays with the appeal of statue and doll, with an odd coupling of life and death, life-like appearance.” In affinity with a fetishistic dynamics between the inorganic and the living, fashion makes the inorganic come to life, “but does not have to bear the stigmata of life, decline and death”. It has very little to do with women in real life, or authentic bodies, since its main purpose is to be a site “at which mortality of the flesh can be denied”.

But what about a designer like Martin Margiela? A fashion trend (if that is even the right word) like “heroin chic”? The brutalised bodies of Alexander McQueen? Fashion that in fact does nothing or little to deny the existence of death, but quite contrary seems to embrace it, or at least accept it as a fact of life? Well, according to Vinken, fashion after what she calls the “mode de cent ans”, the hundred years of fashion between the introduction of haute couture in the 1860s to its decline in the late 1960s, is generally characterized by “a decisive change in the relation of fashion to time.” Vinken speaks of a ”fashion after fashion” or ”postfashion”, an era where fashion no longer tries to extinguish mortality, but rather aims to show the traces of time, time as duration. “In the extreme case, clothing becomes a sign of mortality, an index of time that has passed.” she writes, referring to designers such as Rei Kawakubo, Yohji Yamamoto and yes, Martin Margiela. In a famous essay in another book, the exhibition catalogue for 6+ Antwerp Fashion, Vinken poetically describes the clothes of Margiela as “an art of memory, ars memoria”. “Constructed from worn-out cloth, they do not reanimate the past, do not bring it back into a timeless present, but carry individual traces of death.” I think everyone who doubts that fashion has a meaning beyond the surface would benefit from reading Barbara Vinken: life and death – nothing less.

Maria Ben Saad is a fashion journalist and senior lecturer in fashion communication at Beckmans College of Design in Stockholm.