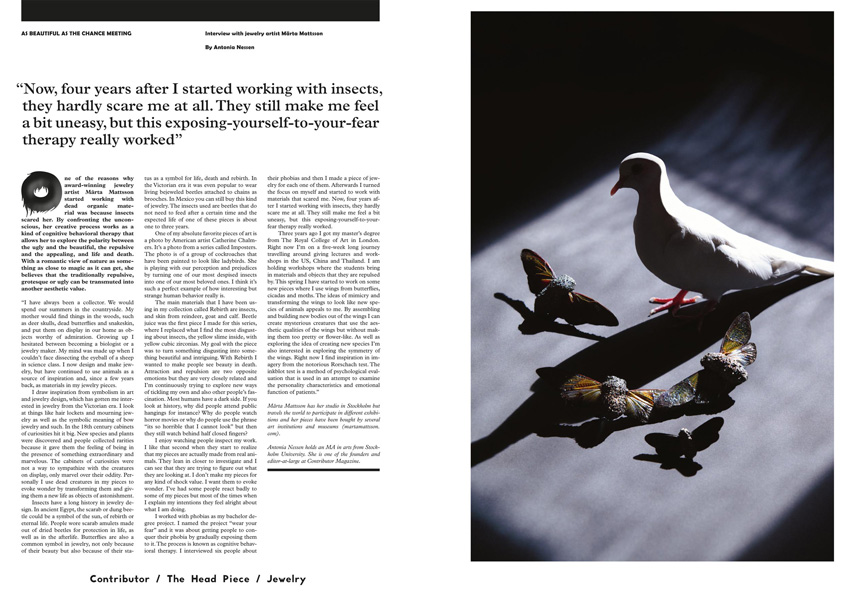 One of the reasons why award-winning jewelry artist Märta Mattsson started working with dead organic material was because insects scared her. By confronting the uncon- scious, her creative process works as a kind of cognitive behavioral therapy that allows her to explore the polarity between the ugly and the beautiful, the repulsive and the appealing, and life and death. With a romantic view of nature as something as close to magic as it can get, she believes that the traditionally repulsive, grotesque or ugly can be transmuted into another aesthetic value.

“I have always been a collector. We would spend our summers in the countryside. My mother would find things in the woods, such as deer skulls, dead butterflies and snakeskin, and put them on display in our home as objects worthy of admiration. Growing up I hesitated between becoming a biologist or a jewelry maker. My mind was made up when I couldn’t face dissecting the eyeball of a sheep in science class. I now design and make jewelry, but have continued to use animals as a source of inspiration and, since a few years back, as materials in my jewelry pieces.

I draw inspiration from symbolism in art and jewelry design, which has gotten me interested in jewelry from the Victorian era. I look at things like hair lockets and mourning jewelry as well as the symbolic meaning of bow jewelry and such. In the 18th century cabinets of curiosities hit it big. New species and plants were discovered and people collected rarities because it gave them the feeling of being in the presence of something extraordinary and marvelous. The cabinets of curiosities were not a way to sympathize with the creatures on display, only marvel over their oddity. Personally I use dead creatures in my pieces to evoke wonder by transforming them and giving them a new life as objects of astonishment.

Insects have a long history in jewelry design. In ancient Egypt, the scarab or dung beetle could be a symbol of the sun, of rebirth or eternal life. People wore scarab amulets made out of dried beetles for protection in life, as well as in the afterlife. Butterflies are also a common symbol in jewelry, not only because of their beauty but also because of their status as a symbol for life, death and rebirth. In the Victorian era it was even popular to wear living bejeweled beetles attached to chains as brooches. In Mexico you can still buy this kind of jewelry. The insects used are beetles that do not need to feed after a certain time and the expected life of one of these pieces is about one to three years.

One of my absolute favorite pieces of art is a photo by American artist Catherine Chalmers. It’s a photo from a series called Imposters. The photo is of a group of cockroaches that have been painted to look like ladybirds. She is playing with our perception and prejudices by turning one of our most despised insects into one of our most beloved ones. I think it’s such a perfect example of how interesting but strange human behavior really is.

The main materials that I have been using in my collection called Rebirth are insects, and skin from reindeer, goat and calf. Beetle juice was the first piece I made for this series, where I replaced what I find the most disgusting about insects, the yellow slime inside, with yellow cubic zirconias. My goal with the piece was to turn something disgusting into something beautiful and intriguing. With Rebirth I wanted to make people see beauty in death. Attraction and repulsion are two opposite emotions but they are very closely related and I’m continuously trying to explore new ways of tickling my own and also other people’s fas- cination. Most humans have a dark side. If you look at history, why did people attend public hangings for instance? Why do people watch horror movies or why do people use the phrase “its so horrible that I cannot look” but then they still watch behind half closed fingers?

I enjoy watching people inspect my work. I like that second when they start to realize that my pieces are actually made from real animals. They lean in closer to investigate and I can see that they are trying to figure out what they are looking at. I don’t make my pieces for any kind of shock value. I want them to evoke wonder. I’ve had some people react badly to some of my pieces but most of the times when I explain my intentions they feel alright about what I am doing.

I worked with phobias as my bachelor degree project. I named the project “wear your fear” and it was about getting people to conquer their phobia by gradually exposing them to it. The process is known as cognitive behav- ioral therapy. I interviewed six people about their phobias and then I made a piece of jewelry for each one of them. Afterwards I turned the focus on myself and started to work with materials that scared me. Now, four years after I started working with insects, they hardly scare me at all. They still make me feel a bit uneasy, but this exposing-yourself-to-your- fear therapy really worked.

Three years ago I got my master’s degree from The Royal College of Art in London. Right now I’m on a five-week long journey travelling around giving lectures and work- shops in the US, China and Thailand. I am holding workshops where the students bring in materials and objects that they are repulsed by. This spring I have started to work on some new pieces where I use wings from butterflies, cicadas and moths. The ideas of mimicry and transforming the wings to look like new species of animals appeals to me. By assembling and building new bodies out of the wings I can create mysterious creatures that use the aesthetic qualities of the wings but without making them too pretty or flowerlike. As well as exploring the idea of creating new species I’m also interested in exploring the symmetry of the wings. Right now I find inspiration in im- agery from the notorious Rorschach test. The inkblot test is a method of psychological evaluation that is used in an attempt to examine the personality characteristics and emotional function of patients.”

Märta Mattsson has her studio in Stockholm but travels the world to participate in different exhibitions and her pieces have been bought by several art institutions and museums (martamattsson.com).

Writer Antonia Nessen holds an MA in arts from Stockholm University. She is one a co-founder and editor at Contributor Magazine.