Breaking with the Past. Essay by Bradley Quinn 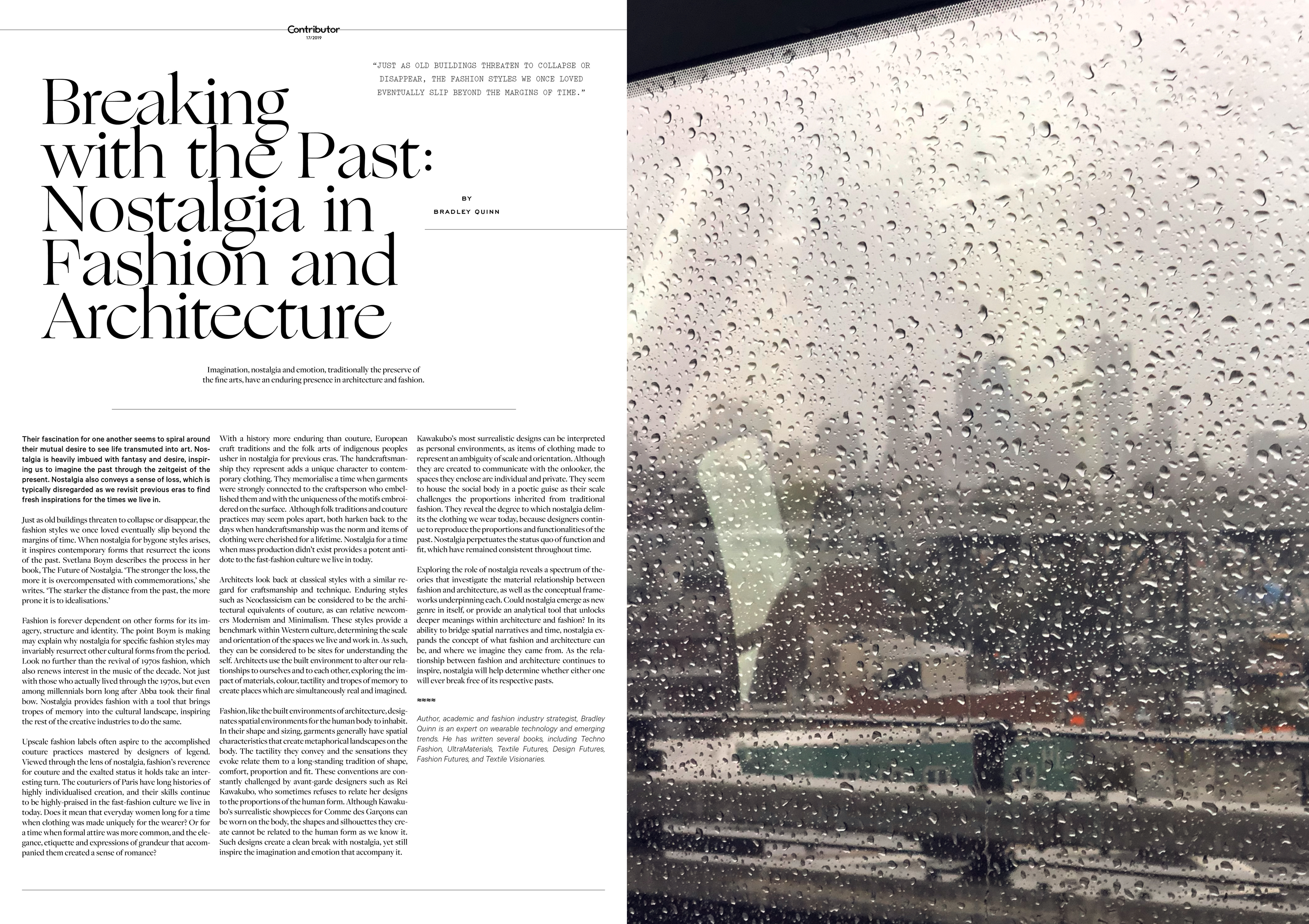 Breaking with the Past: Nostalgia in Fashion and Architecture

Imagination, nostalgia and emotion, traditionally the preserve of the fine arts, have an enduring presence in architecture and fashion.

Their fascination for one another seems to spiral around their mutual desire to see life transmuted into art. Nostalgia is heavily imbued with fantasy and desire, inspiring us to imagine the past through the zeitgeist of the present. Nostalgia also conveys a sense of loss, which is typically disregarded as we revisit previous eras to find fresh inspirations for the times we live in.

Just as old buildings threaten to collapse or disappear, the fashion styles we once loved eventually slip beyond the margins of time. When nostalgia for bygone styles arises, it inspires contemporary forms that resurrect the icons of the past. Svetlana Boym describes the process in her book, The Future of Nostalgia. ‘The stronger the loss, the more it is overcompensated with commemorations,’ she writes. ‘The starker the distance from the past, the more prone it is to idealisations.’

Fashion is forever dependent on other forms for its imagery, structure and identity. The point Boym is making may explain why nostalgia for specific fashion styles may invariably resurrect other cultural forms from the period. Look no further than the revival of 1970s fashion, which also renews interest in the music of the decade. Not just with those who actually lived through the 1970s, but even among millennials born long after Abba took their final bow. Nostalgia provides fashion with a tool that brings tropes of memory into the cultural landscape, inspiring the rest of the creative industries to do the same.

Upscale fashion labels often aspire to the accomplished couture practices mastered by designers of legend. Viewed through the lens of nostalgia, fashion’s reverence for couture and the exalted status it holds take an interesting turn. The couturiers of Paris have long histories of highly individualised creation, and their skills continue to be highly-praised in the fast-fashion culture we live in today. Does it mean that everyday women long for a time when clothing was made uniquely for the wearer? Or for a time when formal attire was more common, and the elegance, etiquette and expressions of grandeur that accompanied them created a sense of romance?

With a history more enduring than couture, European craft traditions and the folk arts of indigenous peoples usher in nostalgia for previous eras. The handcraftsmanship they represent adds a unique character to contemporary clothing. They memorialise a time when garments were strongly connected to the craftsperson who embellished them and with the uniqueness of the motifs embroidered on the surface. Although folk traditions and couture practices may seem poles apart, both harken back to the days when handcraftsmanship was the norm and items of clothing were cherished for a lifetime. Nostalgia for a time when mass production didn’t exist provides a potent antidote to the fast-fashion culture we live in today.

Architects look back at classical styles with a similar regard for craftsmanship and technique. Enduring styles such as Neoclassicism can be considered to be the architectural equivalents of couture, as can relative newcomers Modernism and Minimalism. These styles provide a benchmark within Western culture, determining the scale and orientation of the spaces we live and work in. As such, they can be considered to be sites for understanding the self. Architects use the built environment to alter our relationships to ourselves and to each other, exploring the impact of materials, colour, tactility and tropes of memory to create places which are simultaneously real and imagined.

Fashion, like the built environments of architecture, designates spatial environments for the human body to inhabit. In their shape and sizing, garments generally have spatial characteristics that create metaphorical landscapes on the body. The tactility they convey and the sensations they evoke relate them to a long-standing tradition of shape, comfort, proportion and fit. These conventions are constantly challenged by avant-garde designers such as Rei Kawakubo, who sometimes refuses to relate her designs to the proportions of the human form. Although Kawakubo’s surrealistic showpieces for Comme des Garçons can be worn on the body, the shapes and silhouettes they create cannot be related to the human form as we know it. Such designs create a clean break with nostalgia, yet still inspire the imagination and emotion that accompany it.

Kawakubo’s most surrealistic designs can be interpreted as personal environments, as items of clothing made to represent an ambiguity of scale and orientation. Although they are created to communicate with the onlooker, the spaces they enclose are individual and private. They seem to house the social body in a poetic guise as their scale challenges the proportions inherited from traditional fashion. They reveal the degree to which nostalgia delimits the clothing we wear today, because designers continue to reproduce the proportions and functionalities of the past. Nostalgia perpetuates the status quo of function and fit, which have remained consistent throughout time.