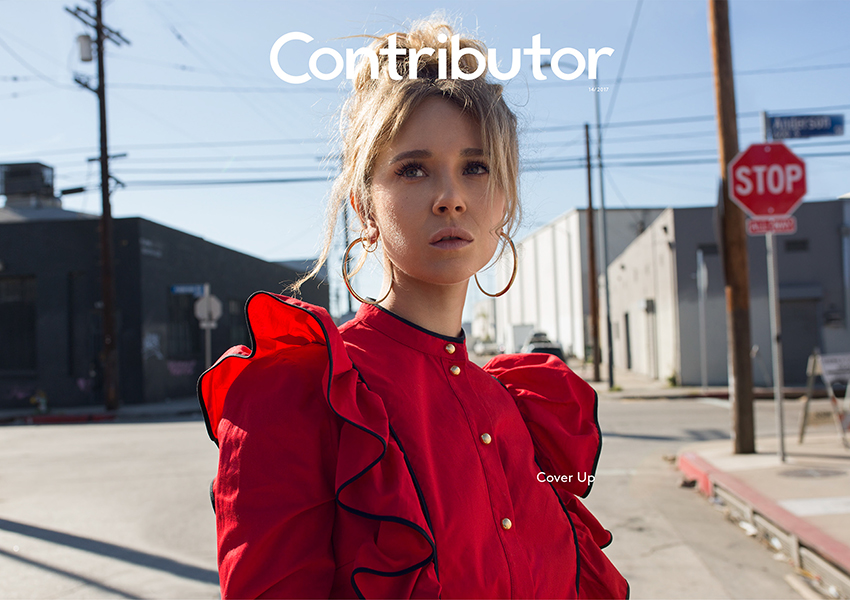 The Art of The Cover Up

For this issue of Contributor, we continue to package the magazine in a box. The inside showcases prints in four different sizes, two posters and a limited edition that includes one signed and numbered C-print from our cover story with exceptionally talented Juno Temple.

Throughout the issue, our contributors take a look at fashion as a cover-up. In his famous classic, “The Psychology of Clothes” (1930), J. C. Flügel examines how clothes are a means of protecting the body from various real or imaginary threats. First and foremost, clothes help us survive physical challenges such as cold weather, but Flügel also views clothes as a psychological armour that can give us emotional reassurance when we feel lost or confused. Like a tortoise or a snail, we carry a sort of home on our backs and unfriendly surroundings can prompt “us to withdraw our inner selves into the protection of our clothes.”

In his in-depth essay on the subject, contributor Bradley Quinn writes about how generations of designers considered the female body to be a blank canvas. But a positive shift across the industry has occurred and fashion is going beyond its legacy and “begins to change from the inside, filling its blank canvasses with inclusive designs.”

In keeping with our theme, we speak to designers who work with the opposition between covering up the body and exposing it. Founded by herself and Co-Creative Director Todd Pendu, Zana Bayne’s eponymous brand quickly gained attention with its fetish-inspired accessories. Since its launch in 2010, the New York-based brand has attracted famous musicians, actors, artists and private clients alike. Glenn Martens, the Belgian designer who won the prestigious ANDAM prize this year, has turned Y/Projects into one of the most sought-after independent brands right now, and works with silhouettes that are hovering between rationalism and pure instinct. Johanna Senyk, the Paris-based mastermind behind Wanda Nylon, started off with a simple concept: she wanted stylish waterproof clothes that could complement a trendy wardrobe. Capitalizing on her own singularity and tapping into the fashion world’s ongoing obsession with fetishism, Wanda Nylon has quickly become a success.

In Woody Allen’s new film Wonder Wheel, our cover-star Juno Temple gives one of the year’s most captivating performances, proving why the actress’ star is continually on the rise. In her interview with journalist Max Berlinger, she says that fashion-wise she’s a bit of a maximalist. “I have some friends that say, ‘You know what, can you just remove one thing? There’s one too many broaches on that jacket.’ They’re like, ‘Let’s bring it in a tiny bit,’ which always makes me laugh.”

We also spoke to Dutch artist Jeanette Slütter, whose works play on the idea of cover-up, and we look into the hidden tradition of covering up death in the funeral business to make us look alive for a final moment of farewell in the presence of our loved ones.

Exploring fashion through art and photography since 2008, Contributor invites the viewer into a three-dimensional world of inspiration and creativity. In bringing together some of the most interesting artists today, we highlight experimental approaches to photography. Contributor is available online and in selected stores worldwide. The production team behind Contributor consists of Editor-in-Chief Robert Rydberg, Creative Director Martin Sandberg, Publishing Editor Antonia Nessen, Executive Editor Magnus Magnusson and Fashion Editor Hilda Sandström, working alongside editorial partners. 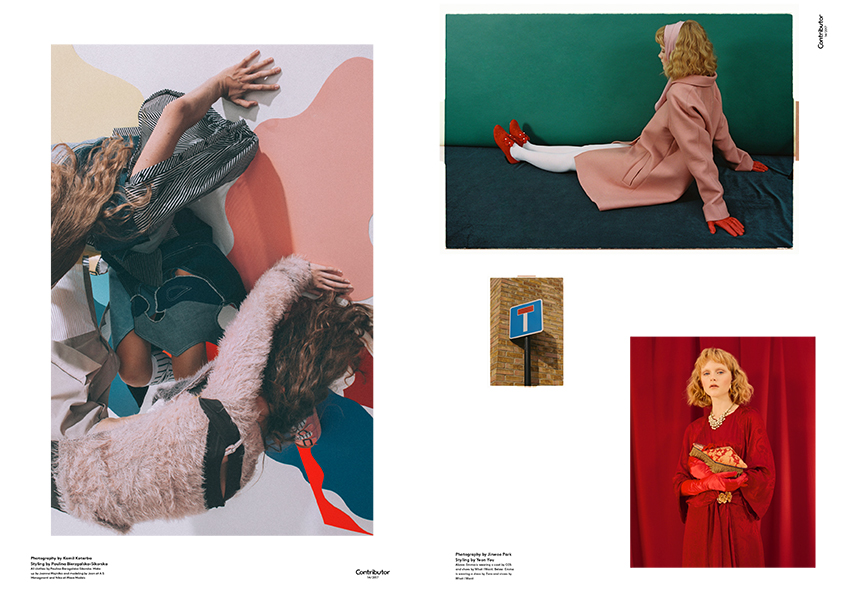 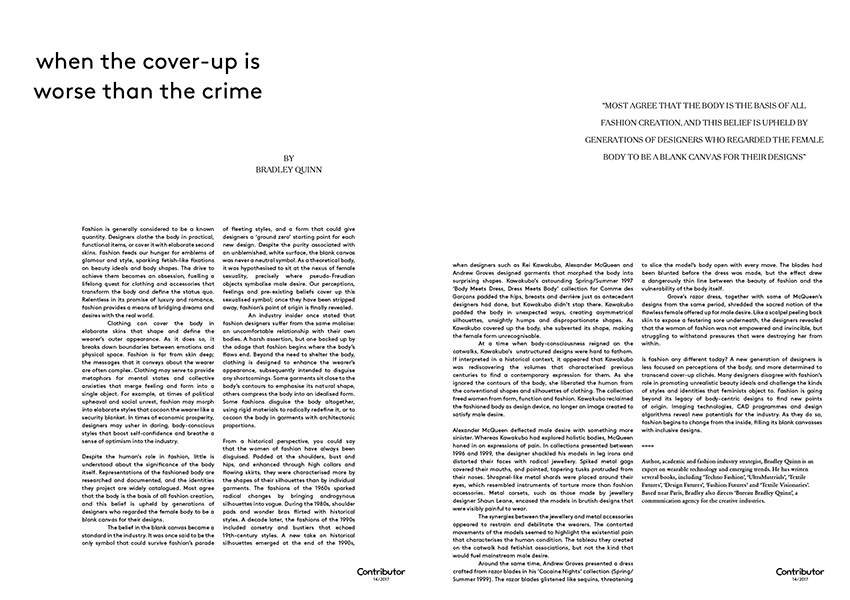 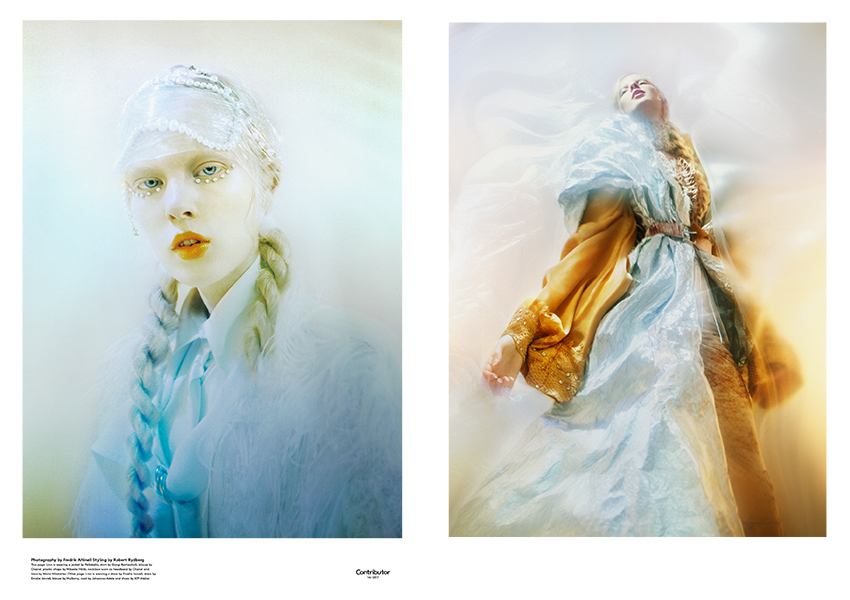 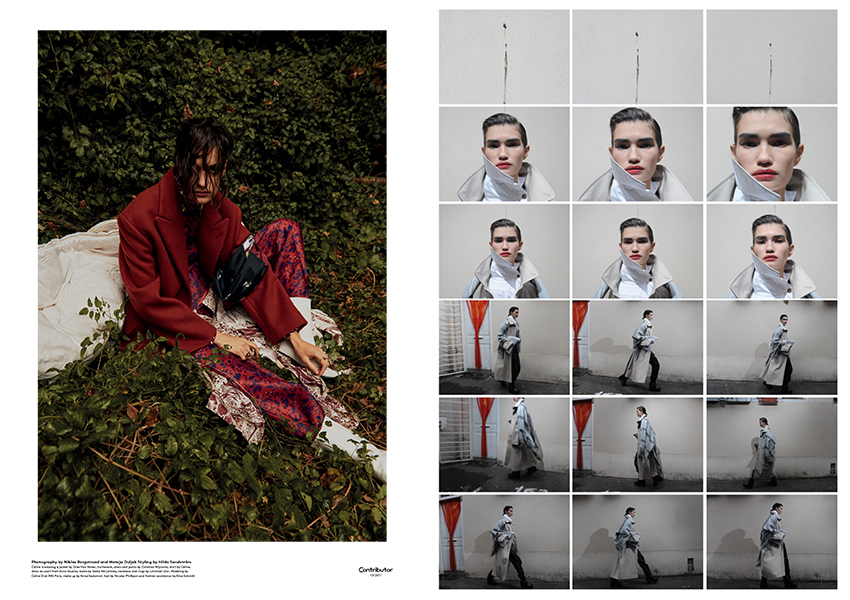 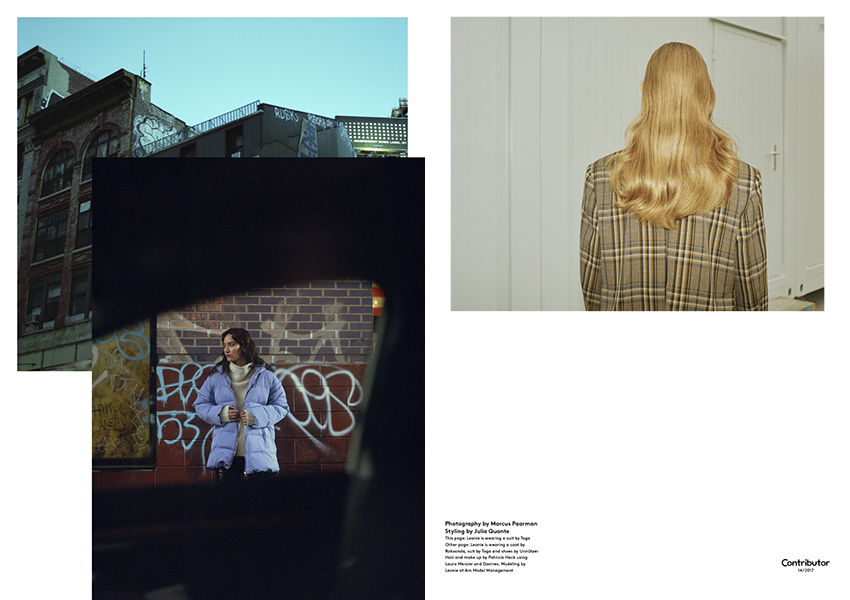 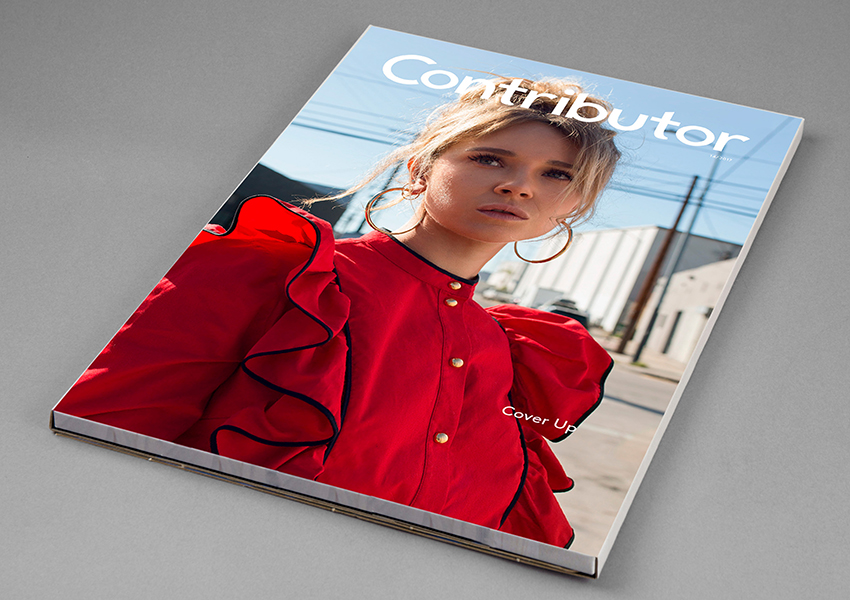 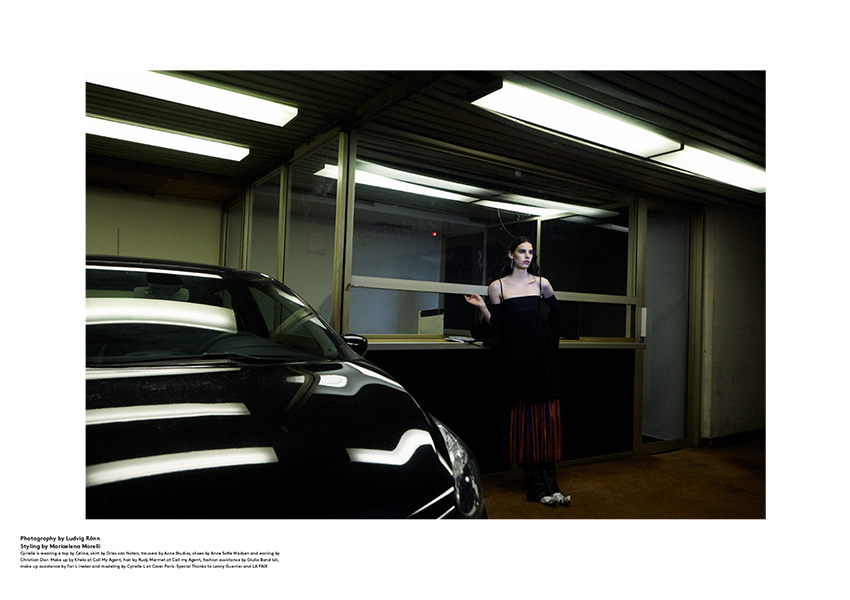 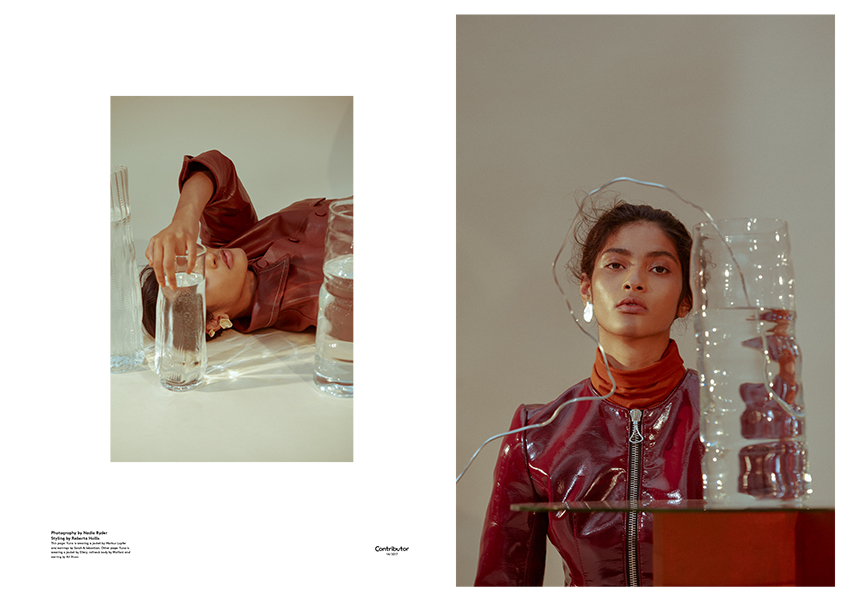 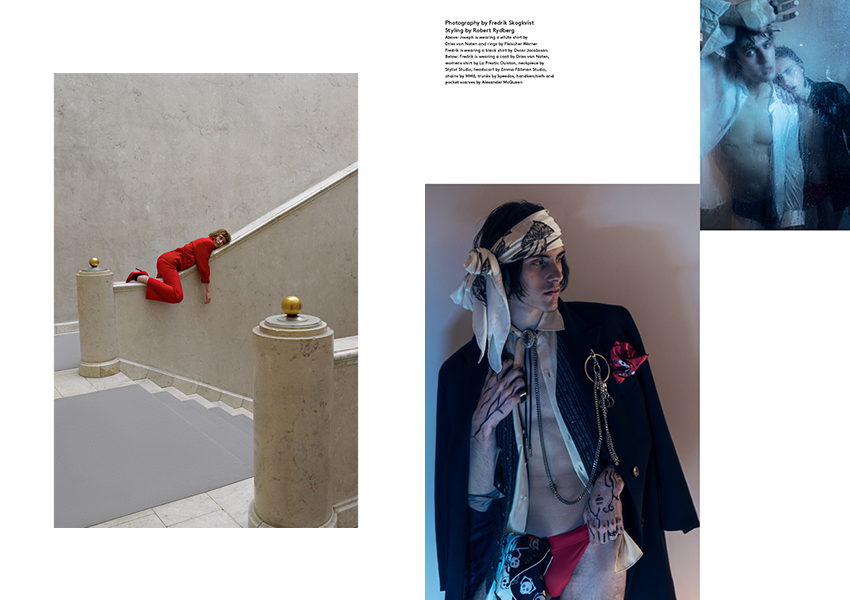 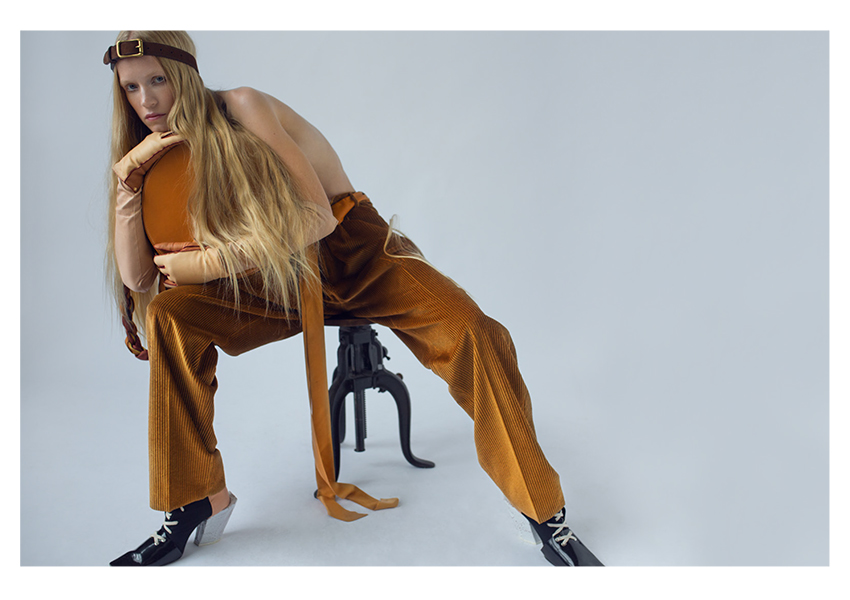 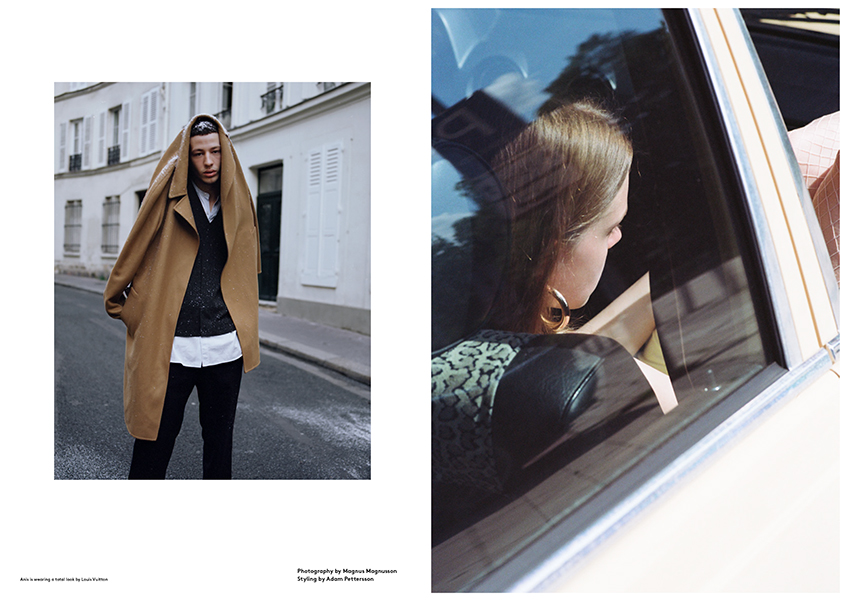