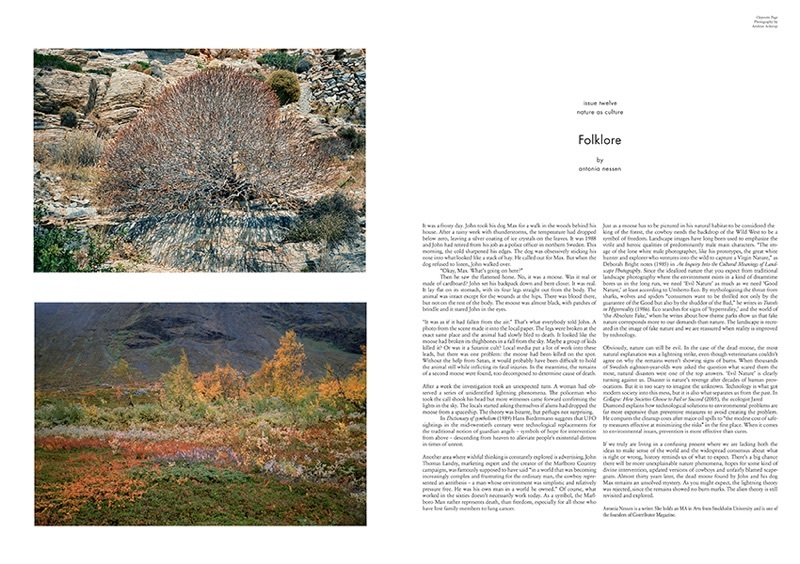 It was a frosty day. John took his dog Max for a walk in the woods behind his house. After a rainy week with thunderstorms, the temperature had dropped below zero, leaving a silver coating of ice crystals on the leaves. It was 1988 and John had retired from his job as a police officer in northern Sweden. This morning, the cold sharpened his edges. The dog was obsessively sticking his nose into what looked like a stack of hay. He called out for Max. But when the dog refused to listen, John walked over.

Then he saw the flattened horse. No, it was a moose. Was it real or made of cardboard? John set his backpack down and bent closer. It was real. It lay flat on its stomach, with its four legs straight out from the body. The animal was intact except for the wounds at the hips. There was blood there, but not on the rest of the body. The moose was almost black, with patches of brindle and it stared John in the eyes.

“It was as if it had fallen from the air.” That’s what everybody told John. A photo from the scene made it into the local paper. The legs were broken at the exact same place and the animal had slowly bled to death. It looked like the moose had broken its thighbones in a fall from the sky. Maybe a group of kids killed it? Or was it a Satanist cult? Local media put a lot of work into these leads, but there was one problem: the moose had been killed on the spot. Without the help from Satan, it would probably have been difficult to hold the animal still while inflicting its fatal injuries. In the meantime, the remains of a second moose were found, too decomposed to determine cause of death.

After a week the investigation took an unexpected turn. A woman had observed a series of unidentified lightning phenomena. The policeman who took the call shook his head but more witnesses came forward confirming the lights in the sky. The locals started asking themselves if aliens had dropped the moose from a spaceship. The theory was bizarre, but perhaps not surprising.

In the true story of the dead moose, the most natural explanation was a lightning strike, even though veterinarians couldn’t agree on why the remains weren’t showing signs of burns. In Dictionary of symbolism (1989) Hans Biedermann suggests that UFO sightings in the mid-twentieth century were technological replacements for the traditional notion of guardian angels – symbols of hope for intervention from above – descending from heaven to alleviate people’s existential distress in times of unrest.

Almost thirty years later, the dead moose found by John and his dog Max remains an unsolved mystery. As you might expect, the lightning theory was rejected, since the remains showed no burn marks. The alien theory is still revisited and explored. Just as a moose has to be pictured in his natural habitat to be considered the king of the forest, the cowboy needs the backdrop of the Wild West to be a symbol of freedom. Landscape images have long been used to emphasize the virile and heroic qualities of predominantly male main characters. “The image of the lone white male photographer, like his prototypes, the great white hunter and explorer who ventures into the wild to capture a Virgin Nature,” as Deborah Bright notes (1985) in An Inquiry Into the Cultural Meanings of Landscape Photography.

Another area where wishful thinking is constantly explored is advertising. John Thomas Landry, marketing expert and the creator of the Marlboro Country campaigns, was famously supposed to have said “in a world that was becoming increasingly complex and frustrating for the ordinary man, the cowboy represented an antithesis – a man whose environment was simplistic and relatively pressure free. He was his own man in a world he owned.” Of course, what worked in the sixties doesn’t necessarily work today. As a symbol, the Marlboro Man rather represents death, than freedom, especially for all those who have lost family members to lung cancer.

Since the idealized nature that you expect from traditional landscape photography where the environment exists in a kind of dreamtime bores us in the long run, we need ‘Evil Nature’ as much as we need ‘Good Nature,’ at least according to Umberto Eco. By mythologizing the threat from sharks, wolves and spiders “consumers want to be thrilled not only by the guarantee of the Good but also by the shudder of the Bad,” he writes in Travels in Hyperreality (1986). Eco searches for signs of ‘hyperreality,’ and the world of ‘the Absolute Fake,’ when he writes about how theme parks show us that fake nature corresponds more to our demands than nature. The landscape is recreated in the image of fake nature and we are reassured when reality is improved by technology.

Obviously, nature can still be evil. When thousands of Swedish eighteen-year-olds were asked the question what scared them the most, natural disasters were one of the top answers. ‘Evil Nature’ is clearly turning against us. Disaster is nature’s revenge after decades of human provocations. But it is too scary to imagine the unknown. Technology is what got modern society into this mess, but it is also what separates us from the past. In Collapse: How Societies Choose to Fail or Succeed (2005), the ecologist Jared Diamond explains how technological solutions to environmental problems are far more expensive than preventive measures to avoid creating the problem. He compares the cleanup costs after major oil spills to “the modest cost of safety measures effective at minimizing the risks” in the first place. When it comes to environmental issues, prevention is more effective than cures.

If we truly are living in a confusing present where we are lacking both the ideas to make sense of the world and the widespread consensus about what is right or wrong, history reminds us of what to expect. There’s a big chance there will be more unexplainable nature phenomena, hopes for some kind of divine intervention, updated versions of cowboys and unfairly blamed scapegoats.

Antonia Nessen is a writer. She holds an MA in Arts from Stockholm University and is one of the founders of Contributor Magazine. This essay was published in Contributor’s “Nature as Culture” issue in the Fall of 2016