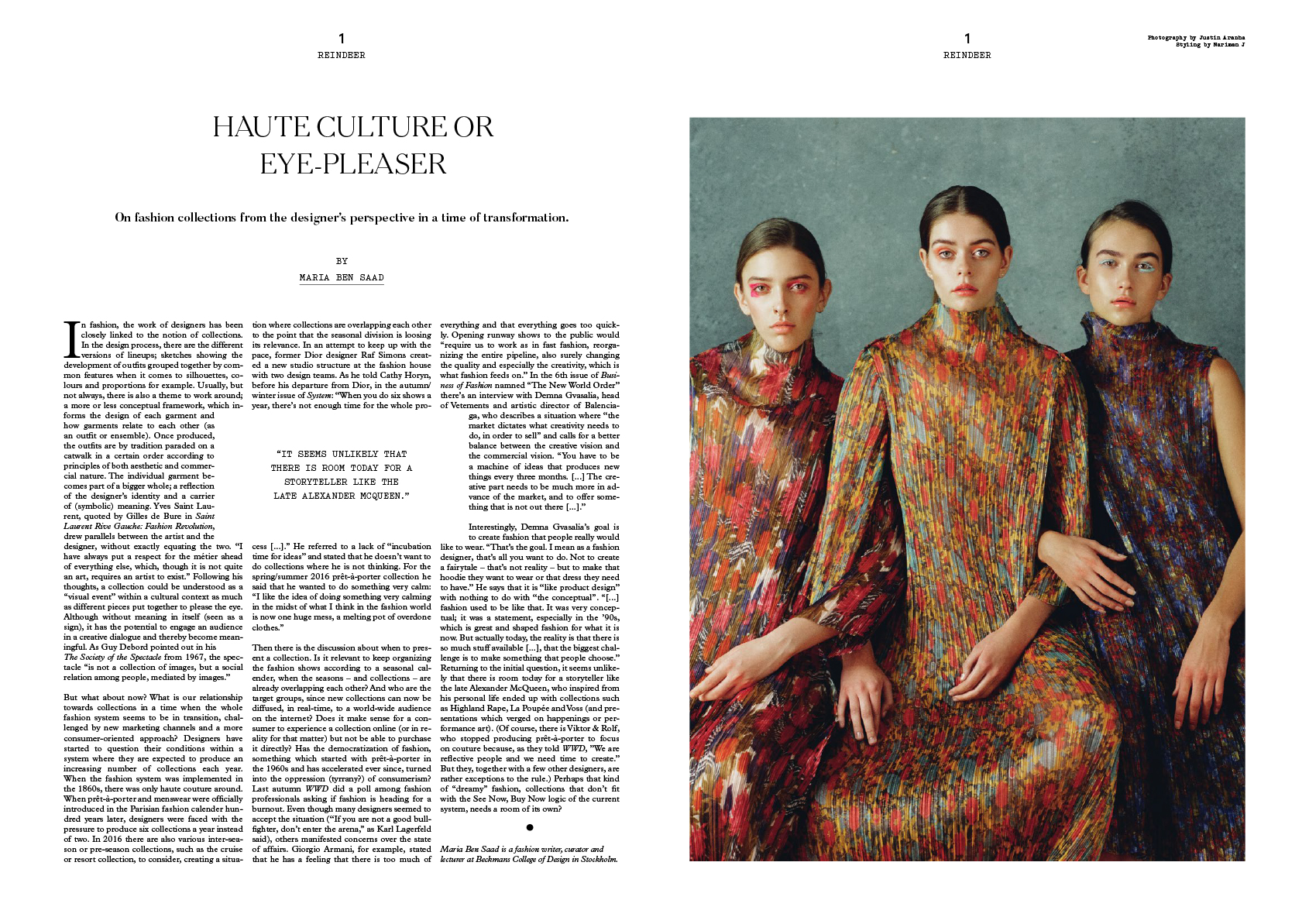 On fashion collections from the designer’s perspective in a time of transformation.

In fashion, the work of designers has been closely linked to the notion of collections. In the design process, there are the different versions of lineups; sketches showing the development of outfits grouped together by common features when it comes to silhouettes, colours and proportions for example. Usually, but not always, there is also a theme to work around; a more or less conceptual framework, which informs the design of each garment and how garments relate to each other (as an outfit or ensemble). Once produced, the outfits are by tradition paraded on a catwalk in a certain order according to principles of both aesthetic and commercial nature.

The individual garment becomes part of a bigger whole; a reflection of the designer’s identity and a carrier of (symbolic) meaning. Yves Saint Laurent, quoted by Gilles de Bure in Saint Laurent Rive Gauche: Fashion Revolution, drew parallels between the artist and the designer, without exactly equating the two. “I have always put a respect for the métier ahead of everything else, which, though it is not quite an art, requires an artist to exist.” Following his thoughts, a collection could be understood as a “visual event” within a cultural context as much as different pieces put together to please the eye. Although without meaning in itself (seen as a sign), it has the potential to engage an audience in a creative dialogue and thereby become meaningful. As Guy Debord pointed out in his The Society of the Spectacle from 1967, the spectacle “is not a collection of images, but a social relation among people, mediated by images.”

But what about now? What is our relationship towards collections in a time when the whole fashion system seems to be in transition, challenged by new marketing channels and a more consumer-oriented approach? Designers have started to question their conditions within a system where they are expected to produce an increasing number of collections each year. When the fashion system was implemented in the 1860s, there was only haute couture around. When prêt-à-porter and menswear were officially introduced in the Parisian fashion calender hundred years later, designers were faced with the pressure to produce six collections a year instead of two. In 2016 there are also various inter-season or pre-season collections, such as the cruise or resort collection, to consider, creating a situation where collections are overlapping each other to the point that the seasonal division is loosing its relevance. In an attempt to keep up with the pace, former Dior designer Raf Simons created a new studio structure at the fashion house with two design teams. As he told Cathy Horyn, before his departure from Dior, in the autumn/ winter issue of System: “When you do six shows a year, there’s not enough time for the whole process […].” He referred to a lack of “incubation time for ideas” and stated that he doesn’t want to do collections where he is not thinking. For the spring/summer 2016 prêt-à-porter collection he said that he wanted to do something very calm: “I like the idea of doing something very calming in the midst of what I think in the fashion world is now one huge mess, a melting pot of overdone clothes.”

Then there is the discussion about when to present a collection. Is it relevant to keep organizing the fashion shows according to a seasonal calender, when the seasons – and collections – are already overlapping each other? And who are the target groups, since new collections can now be diffused, in real-time, to a world-wide audience on the internet? Does it make sense for a consumer to experience a collection online (or in reality for that matter) but not be able to purchase it directly? Has the democratization of fashion, something which started with prêt-à-porter in the 1960s and has accelerated ever since, turned into the oppression (tyrrany?) of consumerism? Last autumn WWD did a poll among fashion professionals asking if fashion is heading for a burnout. Even though many designers seemed to accept the situation (“If you are not a good bullfighter, don’t enter the arena,” as Karl Lagerfeld said), others manifested concerns over the state of affairs. Giorgio Armani, for example, stated that he has a feeling that there is too much of everything and that everything goes too quickly. Opening runway shows to the public would “require us to work as in fast fashion, reorganizing the entire pipeline, also surely changing the quality and especially the creativity, which is what fashion feeds on.” In the 6th issue of Business of Fashion namned “The New World Order” there’s an interview with Demna Gvasalia, head of Vetements and artistic director of Balenciaga, who describes a situation where “the market dictates what creativity needs to do, in order to sell” and calls for a better balance between the creative vision and the commercial vision. “You have to be a machine of ideas that produces new things every three months. […] The creative part needs to be much more in advance of the market, and to offer something that is not out there […].”

Interestingly, Demna Gvasalia’s goal is to create fashion that people really would like to wear. “That’s the goal. I mean as a fashion designer, that’s all you want to do. Not to create a fairytale – that’s not reality – but to make that hoodie they want to wear or that dress they need to have.” He says that it is “like product design” with nothing to do with “the conceptual”. “[…] fashion used to be like that. It was very conceptual; it was a statement, especially in the ’90s, which is great and shaped fashion for what it is now. But actually today, the reality is that there is so much stuff available […], that the biggest challenge is to make something that people choose.” Returning to the initial question, it seems unlikely that there is room today for a storyteller like the late Alexander McQueen, who inspired from his personal life ended up with collections such as Highland Rape, La Poupée and Voss (and presentations which verged on happenings or performance art). (Of course, there is Viktor & Rolf, who stopped producing prêt-à-porter to focus on couture because, as they told WWD, ”We are reflective people and we need time to create.” But they, together with a few other designers, are rather exceptions to the rule.) Perhaps that kind of “dreamy” fashion, collections that don’t fit with the See Now, Buy Now logic of the current system, needs a room of its own?

Photography by Justin Aranha and styling by Nariman J. Maria Ben Saad is a fashion writer, curator and lecturer at Beckmans College of Design in Stockholm.