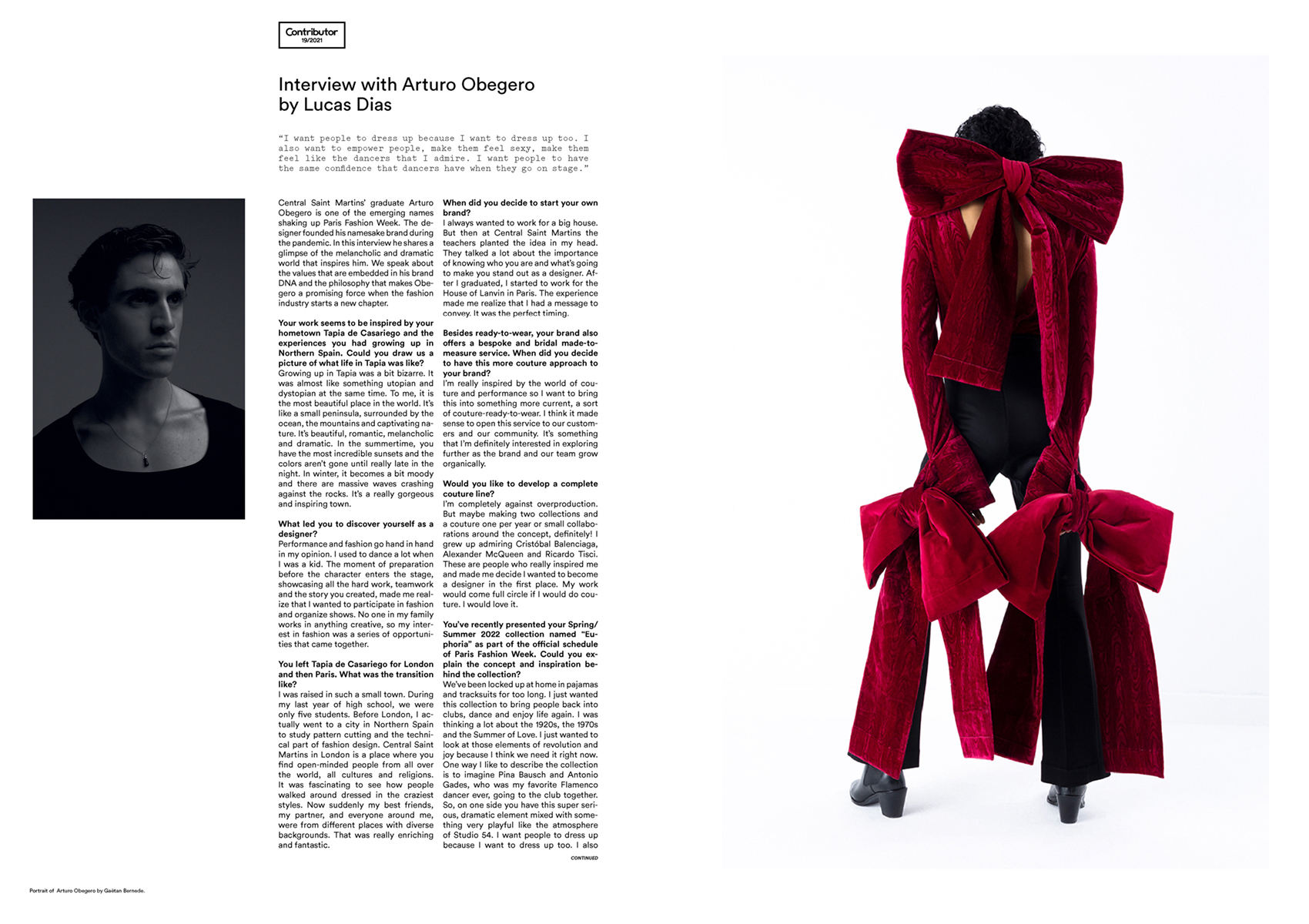 Central Saint Martins’ graduate Arturo Obegero is one of the emerging names shaking up Paris Fashion Week. The designer founded his namesake brand during the pandemic. In this interview he shares a glimpse of the melancholic and dramatic world that inspires him. We speak about the values that are embedded in his brand DNA and the philosophy that makes Obegero a promising force when the fashion industry starts a new chapter.

Your work seems to be inspired by your hometown Tapia de Casariego and the experiences you had growing up in Northern Spain. Could you draw us a picture of what life in Tapia was like?

Growing up in Tapia was a bit bizarre. It was almost like something utopian and dystopian at the same time. To me, it is the most beautiful place in the world. It’s like a small peninsula, surrounded by the ocean, the mountains and captivating nature. It’s beautiful, romantic, melancholic and dramatic. In the summertime, you have the most incredible sunsets and the colors aren’t gone until really late in the night. In winter, it becomes a bit moody and there are massive waves crashing against the rocks. It’s a really gorgeous and inspiring town.

What led you to discover yourself as a designer?

Performance and fashion go hand in hand in my opinion. I used to dance a lot when I was a kid. The moment of preparation before the character enters the stage, showcasing all the hard work, teamwork and the story you created, made me realize that I wanted to participate in fashion and organize shows. No one in my family works in anything creative, so my interest in fashion was a series of opportunities that came together.

You left Tapia de Casariego for London and then Paris. What was the transition like?

I was raised in such a small town. During my last year of high school, we were only five students. Before London, I actually went to a city in Northern Spain to study pattern cutting and the technical part of fashion design. Central Saint Martins in London is a place where you find open-minded people from all over the world, all cultures and religions. It was fascinating to see how people walked around dressed in the craziest styles. Now suddenly my best friends, my partner, and everyone around me, were from different places with diverse backgrounds. That was really enriching and fantastic.

When did you decide to start your own brand?

I always wanted to work for a big house. But then at Central Saint Martins the teachers planted the idea in my head. They talked a lot about the importance of knowing who you are and what’s going to make you stand out as a designer. After I graduated, I started to work for the House of Lanvin in Paris. The experience made me realize that I had a message to convey. It was the perfect timing.

Besides ready-to-wear, your brand also offers a bespoke and bridal made-to-measure service. When did you decide to have this more couture approach to your brand?

I’m really inspired by the world of couture and performance so I want to bring this into something more current, a sort of couture-ready-to-wear. I think it made sense to open this service to our customers and our community. It’s something that I’m definitely interested in exploring further as the brand and our team grow organically. 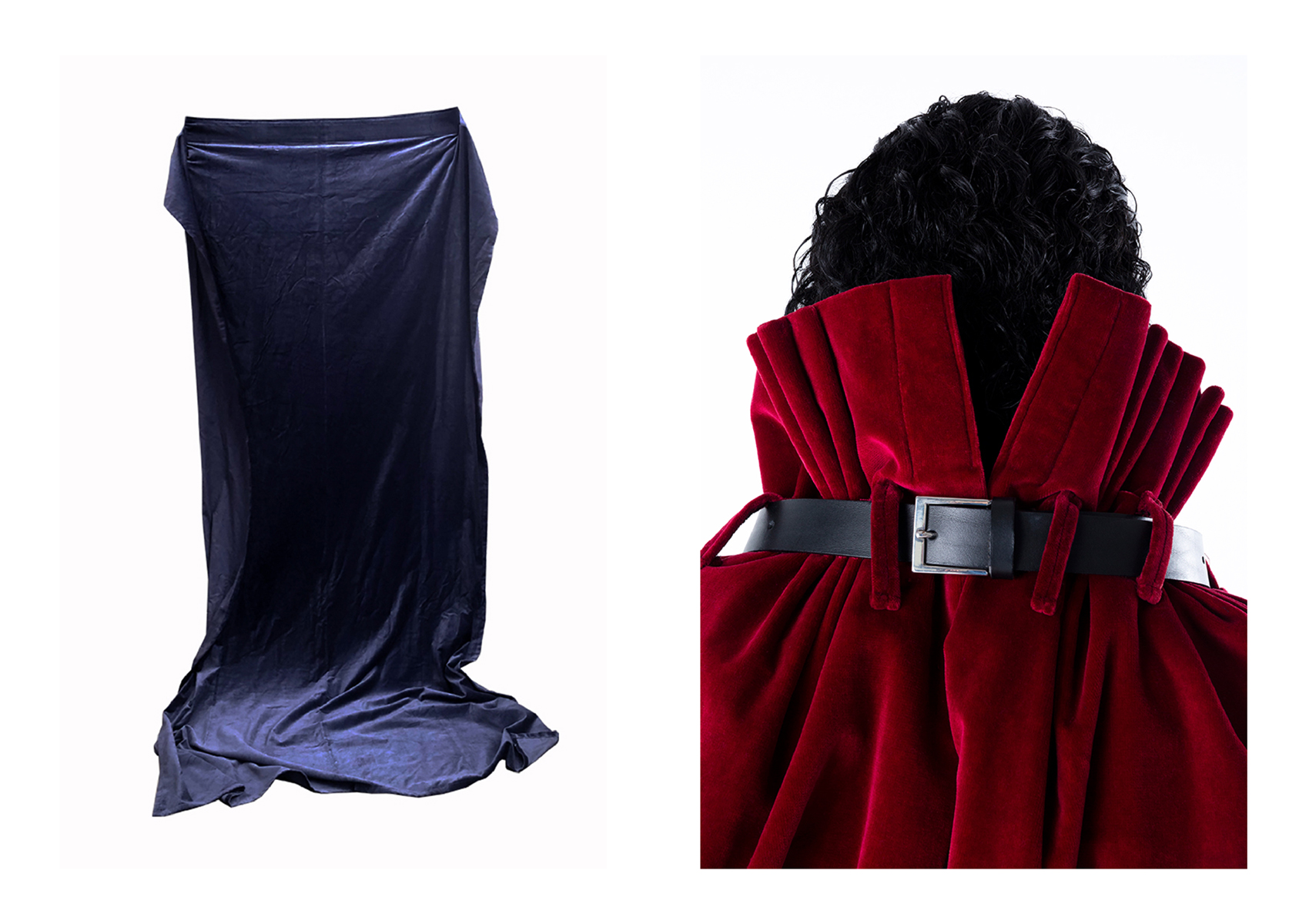 Would you like to develop a complete couture line?

I’m completely against overproduction. But maybe making two collections and a couture one per year or small collaborations around the concept, definitely! I grew up admiring Cristóbal Balenciaga, Alexander McQueen and Riccardo Tisci. These are people who really inspired me and made me decide I wanted to become a designer in the first place. My work would come full circle if I would do couture. I would love it.

You’ve recently presented your Spring/ Summer 2022 collection named “Euphoria” as part of the official schedule of Paris Fashion Week. Could you explain the concept and inspiration behind the collection?

We’ve been locked up at home in pajamas and tracksuits for too long. I just wanted this collection to bring people back into clubs, dance and enjoy life again. I was thinking a lot about the 1920s, the 1970s and the Summer of Love. I just wanted to look at those elements of revolution and joy because I think we need it right now. One way I like to describe the collection is to imagine Pina Bausch and Antonio Gades, who was my favorite Flamenco dancer ever, going to the club together. So, on one side you have this super serious, dramatic element mixed with something very playful like the atmosphere of Studio 54. I want people to dress up because I want to dress up too. I also want to empower people, make them feel sexy, make them feel like the dancers that I admire. I want people to have the same confidence that dancers have when they go on stage.

You have also been part of SPHERE, the emerging brands initiative started by the Fédération de la Haute Couture et de la Mode. How did it feel to get the support of such an important institution?

It was fantastic. We launched in April 2020, during the first national confinement in France. The first time we were on the official calendar, with “Puro Teatro,” was in the middle of the pandemic so we couldn’t do a physical show. But with the Euphoria collection we were able to hold an event at Palais de Tokyo. We could only invite 20 people, counting staff, models and guests, but it worked out in the end. People were smiling, dancing and having fun. We had great feedback from our customers, our community and the press. Having someone like Pascal Morand, who is the Executive President of the FHCM, come up to me and say, “The show was fantastic! This was what we needed. The clothes looked perfect, the casting was great, people were having fun.”; that really meant a lot to me.

Do you have a person in mind when you create your collections?

I like to think more of an emotion. I think that people who appreciate, wear and consume Arturo Obegero are people who, like me, share a passion for clothes with meaning and substance. They have a special sensitivity and they want to feel a certain way. Of course, there are people who I look up to and that inspire me and the clothes. Music is one of my strongest sources of inspiration. I love Tamino, Zola Jesus and Solange, and she has worn our clothes! I always try to create a sort of playlist for each collection and depending on the collection it can range from emo music to performative music or even disco.

Your brand is committed to sustainability. What are your values and why are they important to you?

We implemented these values from the start. Sustainability and inclusivity are areas of responsibility we all share. I want to be able to create beautiful clothes, to tell stories and obviously, I want to expand my team. I like to have a great group of friends working with me and to organize amazing shows but I’m not interested in becoming a capitalistic monster that just eats and produces. Seeing how the world is doing and how everything is changing, I think now more than ever, less is more.

Speaking of your roots, there seems to be a sort of Spanish-made content and talent immersion into pop culture lately reaching TV, movies, music and fashion. Why do you think that this is happening now?

It’s funny because the other day when we were browsing Netflix my partner asked me why everything is Spanish. I told him there are a lot of really talented people in Spain. I think we Spanish people are really stubborn and driven. There is a strong generation of Spanish artists emerging across music, fashion, photography and television. Sometimes we tend to devalue our own culture next to English. But I think we now have begun to understand that we should support our talents. If I’m considered to be part of this generation of Spanish people trying to make something new, I’m very happy and proud.

What are your ambitions for the future?

I would love to direct in the future, maybe even create my own play or a movie. In five years’ time, I would love to have my own studio and explore different fields as a designer. Maybe be more immersed in performance, maybe collaborate with the ballet de l’Opéra de Paris or the one in London, or in Madrid. Just plans, a lot of plans! I think it’s great to be ambitious and have a lot of ideas but to not let these ideas consume you. I want to last. So, I’d rather take my time and evolve slowly.

Tell us about your collaboration with the perfumery Pigmentarium.

I’m really excited about the launch of our perfume collaboration. We developed a scent together. It was really exciting to develop all the aspects of the product, from the scent and the bottle to the campaign. All the ingredients are natural. It has elements from the nature surrounding my hometown and from all the things that inspire me. The team at Pigmentarium, perfectly understood the world I wanted to convey, so I’m really excited. 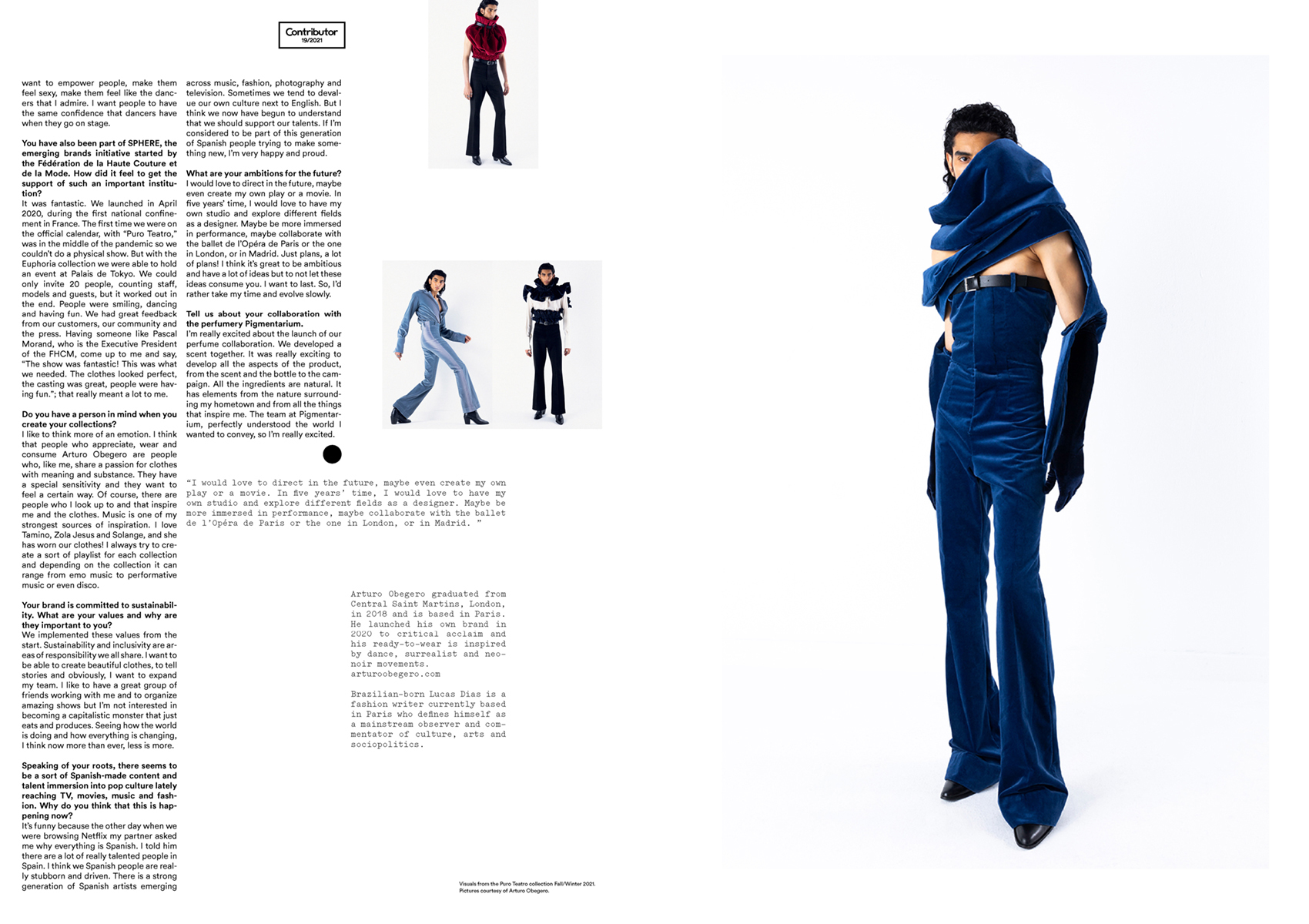 Arturo Obegero graduated from Central Saint Martins, London, in 2018 and is based in Paris. He launched his own brand in 2020 to critical acclaim and his ready-to-wear is inspired by dance, surrealist and neo-noir movements. arturoobegero.com

Brazilian-born Lucas Dias is a fashion writer currently based in Paris who defines himself as a mainstream observer and commentator of culture, arts and sociopolitics.