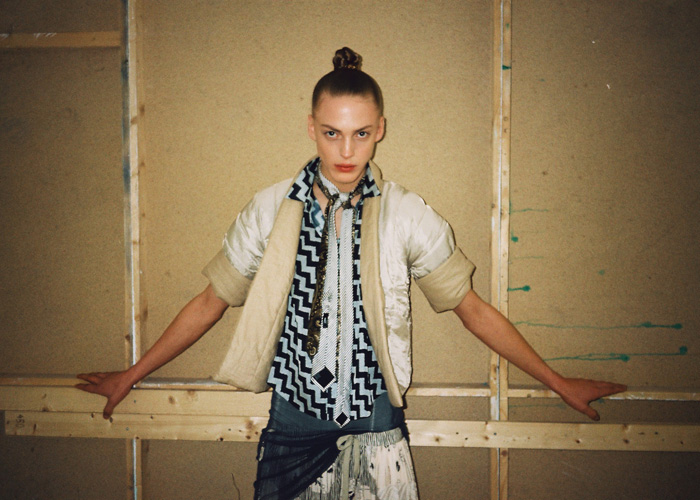 There is a tendency for every generation to believe that it is the brave new world. To believe that what it is doing is braver and newer than anything before. That it is the bee’s knees, the cat’s meow, and even the cat’s pajamas. We are no exception, and justifiably so: It’s a fact that our world is the most chronologically advanced ever. We’ve got the internet, smart phones, and low-fat latte macchiatos. New, today, is renewed at a faster rate than ever before, and in many ways, our world is new each day. But what exactly does it mean to us to be new? Or brave?

New is youth. New is improved. New is not old and not used. New is clean, shiny, modern, happy, smart, successful, and good. In Huxley’s “Brave New World”, too, new is celebrated for its sheer newness. In that futuristic society, “ending is better than mending,” and old things are retired strictly because they are not new. In the here and now, where perfectly functioning televisions are discarded for thinner ones, and the life expectancy of a phone or computer is shorter than a pair of socks, we seem closer to Huxley’s inverse utopia than ever.

Believe it or not, the past, in its time, was ultramodern. There was a time when Fra Angelico was contemporary art. There was a time when fashion was white wigs and tights for men. There was a time, not long ago, when silent black-and-white movies blew people’s minds. But the button of today is inevitably one-upped by the snap of tomorrow and then the zipper of the day after tomorrow, until eventually velcro comes along and trumps them all. And for a minute velcro is the latest and, therefore, the greatest. But newness wears off, and new inevitably is replaced by newer.

Considering this perennial infatuation with the new, why do we continually return to the not new? Our cultural landscape in 2011 includes a remake of the movie Arthur, a sequel to the Hangover, a Spiderman broadway musical, Kanye sampling songs from the ’60s, and Docksides once again in vogue. Do we in fact prefer the familiarity of the not new to the shock of the truly new? Or have we realized that new isn’t all it’s cracked up to be? More often than not, what we sell each other as new is not new at all, or even re-new, but a wholesale regurgitation of something old. And there’s nothing brave about that. Unless you’re pulling your corduroy Op shorts out of the mothballs.

With the speed and change of today, new is no longer new enough. You could call our world Post-New. For as nice as new may be, it’s not as new as now. New has already happened; now is happening. True, new still has newness going for it but now is the newest. Now is always right there to greet the future as it turns to the present. Now is where it’s always at.

So, is today’s world brave? In both the courageous and admirable senses of the word, you could say that it is not. We are perpetually inventing and reinventing gadgets to make our lives easier, more convenient, softer. We can buy ripe tomatoes in February. We are devising increasingly comfortable footwear. We are inching closer and closer to the day when we can control the weather with the click of a button and cure baldness with the pop of a pill. Is this brave? Have we really progressed enough as a species that we should have time to devote to developing apps that make fart sounds? Don’t we have more dire issues to discuss than who wore the worst dress to the Grammys? And wouldn’t our world be newer and braver if we solved those issues?

At the rate we’re going, today’s brave new world will one day be a theme restaurant in a newer, braver world. It will be a chain, a Hard Rock Cafe sort of cybercafe of ironic nostalgia for today. Wait staff will wear vintage skinny jeans and chunky black Ray Bans and say things like “it’s all good.” Customers will dine to a soundtrack of Lady Gaga and Justin Bieber and the Jonas Brothers, and smile at how very quaint it all sounds. “Mobile devices”—long since extinct—will be installed at each table to enable customers to “surf the web” while they wait for their “recession special.” Yes, our brave new world of today will one day be distilled to a cliche, and serve as fodder for our great great great great grandkids’ virtual Halloween costumes. So, how will our world be defined? What will be the bookends of our era? How will our world be summed up? Post-television? Post-internet? Post-postmodern?

None of this is not what a truly brave world strives for. A brave world is hungry for the contest, for earning its keep. A brave new world goes at the finish line with its chest pushed out. A brave world is driven by results and the noble notion of progress. The real brave new world is out to show the future that it respected the dirty fingernails and sweaty armpits of its forefathers, and that it didn’t squander its inheritance on shiny trinkets. No, the real brave new world would take its inheritance, roll up its sleeves, and do a little dirty work to make something bigger. Something newer. Something braver.

Tom Greenwood writes stuff about various things, and vice versa. He’s co-written a cookbook, contributes to a variety of magazines, and has collaborated on a series of projects with artist Ryan McGinness. When not writing about himself in the third person, Tom plays caveman drums and maintains a deadly aquarium. He lives in Brooklyn with his wife.