The Rise and Fall of the Harpsichord in the 1960s 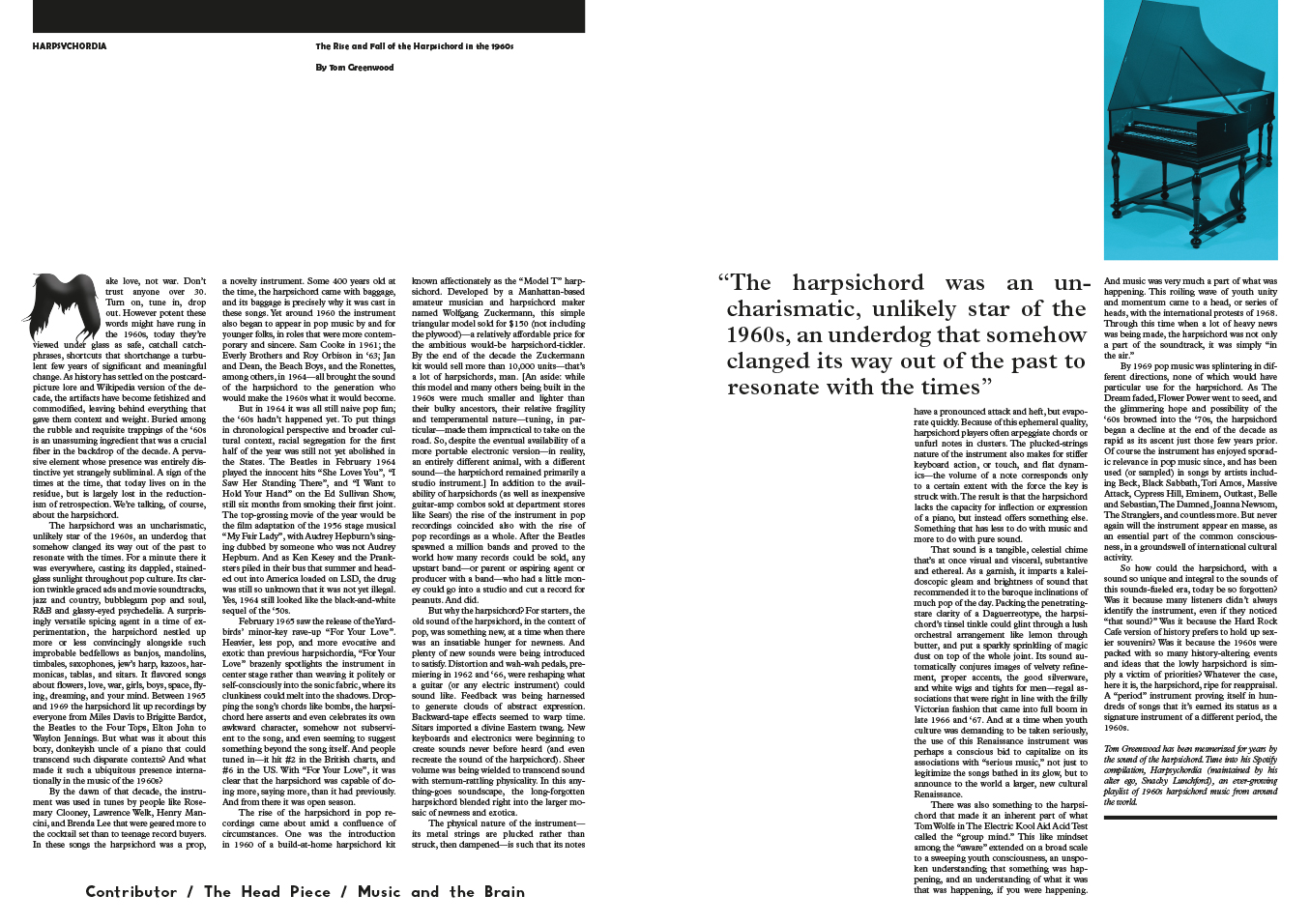 The Rise and Fall of the Harpsichord in the 1960s

Make love, not war. Don’t trust anyone over 30. Turn on, tune in, drop out. However potent these words might have rung in the 1960s, today they’re viewed under glass as safe, catchall catchphrases, shortcuts that shortchange a turbulent few years of significant and meaningful change. As history has settled on the postcard-picture lore and Wikipedia version of the decade, the artifacts have become fetishized and commodified, leaving behind everything that gave them context and weight. Buried among the rubble and requisite trappings of the ‘60s is an unassuming ingredient that was a crucialfiber in the backdrop of the decade. A pervasive element whose presence was entirely distinctive yet strangely subliminal. A sign of the times at the time, that today lives on in the residue, but is largely lost in the reductionism of retrospection. We’re talking, of course, about the harpsichord.

The harpsichord was an uncharismatic, unlikely star of the 1960s, an underdog that somehow clanged its way out of the past to resonate with the times. For a minute there it was everywhere, casting its dappled, stained-glass sunlight throughout pop culture. Its clarion twinkle graced ads and movie soundtracks, jazz and country, bubblegum pop and soul, R&B and glassy-eyed psychedelia. A surprisingly versatile spicing agent in a time of experimentation, the harpsichord nestled up more or less convincingly alongside such improbable bedfellows as banjos, mandolins, timbales, saxophones, jew’s harp, kazoos, harmonicas, tablas, and sitars. It flavored songs about flowers, love, war, girls, boys, space, flying, dreaming, and your mind. Between 1965 and 1969 the harpsichord lit up recordings by everyone from Miles Davis to Brigitte Bardot, the Beatles to the Four Tops, Elton John to Waylon Jennings. But what was it about this boxy, donkeyish uncle of a piano that could transcend such disparate contexts? And what made it such a ubiquitous presence internationally in the music of the 1960s?

By the dawn of that decade, the instrument was used in tunes by people like Rosemary Clooney, Lawrence Welk, Henry Mancini, and Brenda Lee that were geared more to the cocktail set than to teenage record buyers. In these songs the harpsichord was a prop, a novelty instrument. Some 400 years old at the time, the harpsichord came with baggage, and its baggage is precisely why it was cast in these songs. Yet around 1960 the instrument also began to appear in pop music by and for younger folks, in roles that were more contemporary and sincere. Sam Cooke in 1961; the Everly Brothers and Roy Orbison in ‘63; Jan and Dean, the Beach Boys, and the Ronettes, among others, in 1964—all brought the sound of the harpsichord to the generation who would make the 1960s what it would become.

But in 1964 it was all still naive pop fun; the ‘60s hadn’t happened yet. To put things in chronological perspective and broader cultural context, racial segregation for the first half of the year was still not yet abolished in the States. The Beatles in February 1964 played the innocent hits “She Loves You”, “I Saw Her Standing There”, and “I Want to Hold Your Hand” on the Ed Sullivan Show, still six months from smoking their first joint. The top-grossing movie of the year would be the film adaptation of the 1956 stage musical “My Fair Lady”, with Audrey Hepburn’s singing dubbed by someone who was not Audrey Hepburn. And as Ken Kesey and the Pranksters piled in their bus that summer and headed out into America loaded on LSD, the drug was still so unknown that it was not yet illegal. Yes, 1964 still looked like the black-and-white sequel of the ‘50s.

February 1965 saw the release of the Yardbirds’ minor-key rave-up “For Your Love”. Heavier, less pop, and more evocative and exotic than previous harpsichordia, “For Your Love” brazenly spotlights the instrument in center stage rather than weaving it politely or self-consciously into the sonic fabric, where its clunkiness could melt into the shadows. Dropping the song’s chords like bombs, the harpsichord here asserts and even celebrates its own awkward character, somehow not subservient to the song, and even seeming to suggest something beyond the song itself. And people tuned in—it hit #2 in the British charts, and #6 in the US. With “For Your Love”, it was clear that the harpsichord was capable of doing more, saying more, than it had previously. And from there it was open season.

The rise of the harpsichord in pop recordings came about amid a confluence of circumstances. One was the introduction in 1960 of a build-at-home harpsichord kit known affectionately as the “Model T” harpsichord. Developed by a Manhattan-based amateur musician and harpsichord maker named Wolfgang Zuckermann, this simple triangular model sold for $150 (not including the plywood)—a relatively affordable price for the ambitious would-be harpsichord-tickler. By the end of the decade the Zuckermann kit would sell more than 10,000 units—that’s a lot of harpsichords, man. [An aside: while this model and many others being built in the 1960s were much smaller and lighter than their bulky ancestors, their relative fragility and temperamental nature—tuning, in particular—made them impractical to take on the road. So, despite the eventual availability of a more portable electronic version—in reality, an entirely different animal, with a different sound—the harpsichord remained primarily a studio instrument.] In addition to the availability of harpsichords (as well as inexpensive guitar-amp combos sold at department stores like Sears) the rise of the instrument in pop recordings coincided also with the rise of pop recordings as a whole. After the Beatles spawned a million bands and proved to the world how many records could be sold, any upstart band—or parent or aspiring agent or producer with a band—who had a little money could go into a studio and cut a record for peanuts. And did.

But why the harpsichord? For starters, the old sound of the harpsichord, in the context of pop, was something new, at a time when there was an insatiable hunger for newness. And plenty of new sounds were being introduced to satisfy. Distortion and wah-wah pedals, premiering in 1962 and ‘66, were reshaping what a guitar (or any electric instrument) could sound like. Feedback was being harnessed to generate clouds of abstract expression. Backward-tape effects seemed to warp time. Sitars imported a divine Eastern twang. New keyboards and electronics were beginning to create sounds never before heard (and even recreate the sound of the harpsichord). Sheer volume was being wielded to transcend sound with sternum-rattling physicality. In this anything-goes soundscape, the long-forgotten harpsichord blended right into the larger mosaic of newness and exotica.

The physical nature of the instrument— its metal strings are plucked rather than struck, then dampened—is such that its notes have a pronounced attack and heft, but evaporate quickly. Because of this ephemeral quality, harpsichord players often arpeggiate chords or unfurl notes in clusters. The plucked-strings nature of the instrument also makes for stiffer keyboard action, or touch, and flat dynamics—the volume of a note corresponds only to a certain extent with the force the key is struck with.The result is that the harpsichord lacks the capacity for inflection or expression of a piano, but instead offers something else. Something that has less to do with music and more to do with pure sound.

That sound is a tangible, celestial chime that’s at once visual and visceral, substantive and ethereal. As a garnish, it imparts a kaleidoscopic gleam and brightness of sound that recommended it to the baroque inclinations of much pop of the day. Packing the penetrating-stare clarity of a Daguerreotype, the harpsichord’s tinsel tinkle could glint through a lush orchestral arrangement like lemon through butter, and put a sparkly sprinkling of magic dust on top of the whole joint. Its sound automatically conjures images of velvety refinement, proper accents, the good silverware, and white wigs and tights for men—regal associations that were right in line with the frilly Victorian fashion that came into full boom in late 1966 and ‘67. And at a time when youth culture was demanding to be taken seriously, the use of this Renaissance instrument was perhaps a conscious bid to capitalize on its associations with “serious music,” not just to legitimize the songs bathed in its glow, but to announce to the world a larger, new cultural Renaissance.

There was also something to the harpsichord that made it an inherent part of what Tom Wolfe in The Electric Kool Aid Acid Test called the “group mind.” This like mindset among the “aware” extended on a broad scale to a sweeping youth consciousness, an unspoken understanding that something was happening, and an understanding of what it was that was happening, if you were happening. And music was very much a part of what was happening. This roiling wave of youth unity and momentum came to a head, or series of heads, with the international protests of 1968. Through this time when a lot of heavy news was being made, the harpsichord was not only a part of the soundtrack, it was simply “in the air.”

By 1969 pop music was splintering in different directions, none of which would have particular use for the harpsichord. As The Dream faded, Flower Power went to seed, and the glimmering hope and possibility of the ‘60s browned into the ‘70s, the harpsichord began a decline at the end of the decade as rapid as its ascent just those few years prior. Of course the instrument has enjoyed sporadic relevance in pop music since, and has been used (or sampled) in songs by artists including Beck, Black Sabbath, Tori Amos, Massive Attack, Cypress Hill, Eminem, Outkast, Belle and Sebastian,The Damned, Joanna Newsom, The Stranglers, and countless more. But never again will the instrument appear en masse, as an essential part of the common consciousness, in a groundswell of international cultural activity.

So how could the harpsichord, with a sound so unique and integral to the sounds of this sounds-fueled era, today be so forgotten? Was it because many listeners didn’t always identify the instrument, even if they noticed “that sound?” Was it because the Hard Rock Cafe version of history prefers to hold up sexier souvenirs? Was it because the 1960s were packed with so many history-altering events and ideas that the lowly harpsichord is simply a victim of priorities? Whatever the case, here it is, the harpsichord, ripe for reappraisal. A “period” instrument proving itself in hundreds of songs that it’s earned its status as a signature instrument of a different period, the 1960s.

Tom Greenwood has been mesmerized for years by the sound of the harpsichord.Tune into his Spotify compilation, Harpsychordia (maintained by his alter ego, Snacky Lunchford), an ever-growing playlist of 1960s harpsichord music from around the world.